Call to Prayer: Seeing Beyond the Barriers

Posted on November 2, 2020 by VMMissions Staff

As I interact with the Body of Christ in different places around the world, there are words that I have heard spoken on more than one occasion: “These people are almost impossible to reach… They are just so hard.” Maybe you have had the same thoughts about others whose world and ways seem so unlike your own. These thoughts about people who are different than us can make the barriers between us bigger. But are these thoughts accurate? Is this what God is saying about them?

When we moved our family to South Asia in 2009, our hearts were flooded with compassion for the millions of people in that area who had never had the chance to hear about God’s intense and never-ending love for them. We knew that there were some local Christians in that area, but the majority of them felt a huge barrier between themselves and their Muslim neighbors. Very few of them were putting energy into sharing the gospel with them.

Our heart and intention in going was to do as Jesus did when he “became flesh and blood and made his dwelling among us” (John 1:14). We started out by living with a Muslim host family, asking God how he saw these gracious hosts, as well as what he was doing and wanted to do in that whole area. As we listened, he blew open our little ideas with great dreams of his own.

We learned to speak their language, and we learned ways of sharing that built bridges to their hearts rather than bouncing off of walls that Satan has already built. We prayed a lot and obeyed as God showed us what to do and say. We knew that the Holy Spirit has ways of piercing through those walls and reaching into peoples’ hearts.

After many years of living among them, God began to open up opportunities to share in churches about reaching out to Muslims. We knew that the way to begin was through prayer. When we have stereotypes, prejudices or misbeliefs about others, the first changes that God needs to do are within us. (Once God spoke to me about not being prejudiced. I was a bit taken aback, because I didn’t think that I was. Then I looked up the definition and I had to admit that there were times indeed when I had a “preconceived opinion that is not based on reason or actual experience.”) 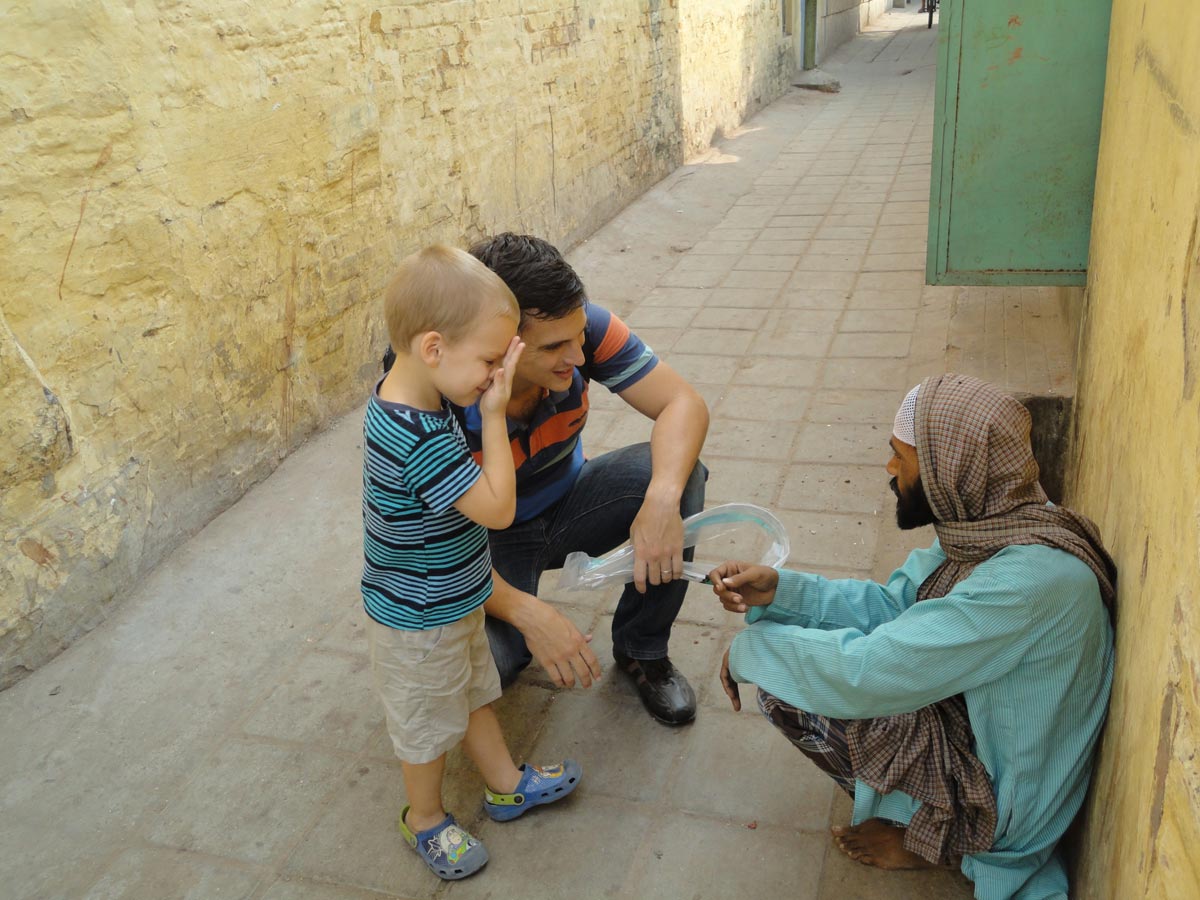 Michael (center) and Gabe interact with a man in their former neighborhood. Courtesy photo

Since God has plenty of wisdom and experience, among all kinds of people, first I need to get his perspective. This change in the way that we think allows the soil of our minds and hearts to receive the seeds of God’s love. The more we pray, the more love grows, and love must be what compels us to move towards others.

At one such mobilizing event in South Asia where we were leading a church in praying for Muslims, I was in the back of the room praying that God would give the participants a picture of what he wants to do among Muslims in their country, a picture that would break through the walls that kept them distanced from their Muslim neighbors.

Shortly after I had silently prayed, a young man spoke up excitedly: “I just saw a picture! There was a door with a brilliant light shining out of it! There were millions of people, Hindus, Muslims, Sikhs, Christians, all running towards that light and shouting ‘GOD!’ From this picture, I now understand that Jesus is not just for the Christians, but for all people!”

Jesus says, “I am the light of the world” (John 8:12), and “I am the door. If anyone enters by me, he will be saved” (John 10:9a). So when the enemy tries to tempt me to focus on the barriers, I remember that picture and pray for eyes to be opened to see the compelling beauty of Jesus shining into our world with arms wide open, causing all to run to him.

Ruthy H. leads regular in-person and virtual prayer gatherings in a VMMissions assignment. She and her husband Michael are VMMissions workers based in Millersville, Pa.