Call to Prayer: Soaking and Leaking

Sometimes, when we think about “doing good” in our natural human ways, we forget that God likes to do good deeds as well. What if we first get in touch with the good that is on God’s heart and then step out to serve with authority? 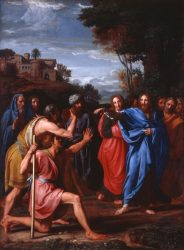 One of our core values as a team in our South Asian Muslim neighborhood was to “hear and obey.” We knew that God had good plans for our neighbors. We also knew intimately the hard details of their lives. We spent a lot of time praying and listening for a sense of God’s dreams for them and what God was specifically guiding us to do. Many mornings, we would have a “soaking and leaking” time slot. We gathered to worship and soak in God’s presence, like sponges; we then went out to share his goodness and love with those around us.

One morning, as we worshiped, a few different people had the impression of God healing blind eyes and even re-creating body parts that had been destroyed. Someone saw the image of a damaged hand that grew anew in the power of our Creator God.

We knew two different men in our community who subsisted by begging. One, whom we called “Uncle,” had his hand destroyed when the propane tank for his cooking stove exploded; the other man, Nur, was blind. They were our friends, and we longed for them to experience the healing power of Jesus. Feeling led by the pictures we saw in worship, we set out and found them in the places where they normally sat to beg.

You know what has happened throughout the province of Judea, beginning in Galilee after the baptism that John preached—how God anointed Jesus of Nazareth with the Holy Spirit and power, and how he went around doing good and healing all who were under the power of the devil, because God was with him.
Acts 10:37-38

While explaining to Nur how God had led us to pray for him that morning, another man who was walking through the narrow alleyway stopped and listened. He observed us until we were finished praying and then asked what we were doing. He had a large beard, a turban, and was wearing a type of robe which signified to us that he was a Muslim from another country.

We again shared what God showed us in worship and prayer, explaining in Urdu that we were trusting God to lead us, and that God has the power to heal.

He then shared his story: “I have come from Afghanistan with my son. His eyes were destroyed in a bomb blast and I was hoping to find medical help for him here. But no doctor has been able to help. We are returning to our country tonight. Please come with me to the room where we are staying!”

As we followed him through the winding alleyways, I marveled at his faith. In their culture, it is not common for males and females who are not in the same family to interact, and here he was, trusting three foreign women and inviting us to come into his space to pray. When we entered the room where his son was, he explained to his son what was happening and we spent quite some time praying for him. They were both very grateful.

I wish I could say that something miraculous happened right in that moment. And yet, I suppose something miraculous did happen—God showed us so clearly that he wanted to heal eyes, and even cause ones that were destroyed to be restored. Then he led us to the very alleyway where that man was walking on his last day in our city. That man expressed his faith in God by inviting us to come and pray. And he and his son experienced the God who sees. God knows more intimately than we do what they need and cared enough to come and visit them by sending us.

Only God knows the end of the story. Over time we rejoiced to know that Nur’s eyesight in one eye greatly improved. Perhaps the reader can pause and say a prayer for this Afghani man and his son. May God continue to make himself real to them.