Posted on December 6, 2013 by VMMissions Staff

I come to the end of my presidency of VMMissions at the conclusion of 2013. As tenures go, eleven-and-a-half years is not so long. Earlene and I for the most part are not record-breakers. Add to these years, however, our years assisting two church plants in Virginia Conference, pastoring other churches, serving overseas with VMMissions, and my childhood in a Virginia Conference church in Ohio and I note that VMC and VMMissions envelops nearly my entire life!

This has been good! I have spent my life in the church, brought to church when I could not choose and encouraged to attend when I might not have chosen. As a young adult I ratified the choice my parents had previously made for me and I became a Mennonite. I have no regrets.

My kind of church however is coming to an end. Many of my generation are not staying in the church and furthermore, even if we were, we are not producing enough babies. Declining birthrates and the defection of many spell the demise of the church as I have known it. Even if we could halt these trajectories the resulting church would be a status quo church composed of those born into it, a birthright church, if you will. Some of these churches will survive longer than others being better at the competition for membership among those still interested.

The emerging church is the church resulting from God’s mission in the entire world. The church arising is not from birth, but from rebirth, not by blood, but by adoption, not though traditions, but through redemption. The church defined primarily historically and ethnically is a thing of the past, although its long shadow may be visible for some time yet. The doors are swinging open. The train has left the station. Climb aboard or get out of the way! A glance around the world shows unmistakably the future has arrived! “My kind of church” is a thing of the past!

We are not left clueless. Others have gone before us and the book of Acts shows a very precise precedent. As God’s chosen few faced extinction or irrelevance, or both, Pentecost arrived! Everything was tried in response to this unexpected movement—rejection, accommodation, domestication, and even murder! God’s Spirit would not be tamed or contained. And the rest, as they say, is history. The center of Christian gravity moved West, and East, and South, and North. For generations Jerusalem was not much more than a footnote in human history.

It was a moving experience for me to baptize my own children and I rejoice when my grandchildren embrace faith. After 60+ years of life Earlene’s and my family; children, spouses, and grandchildren number 11. Almost infinitely greater is the other family to which I belong, God’s family. I want to pay attention to both as the center of Christian gravity moves across our streets and around our world, North, South, East and West. The church of the past is ending! The church of the future is emerging! 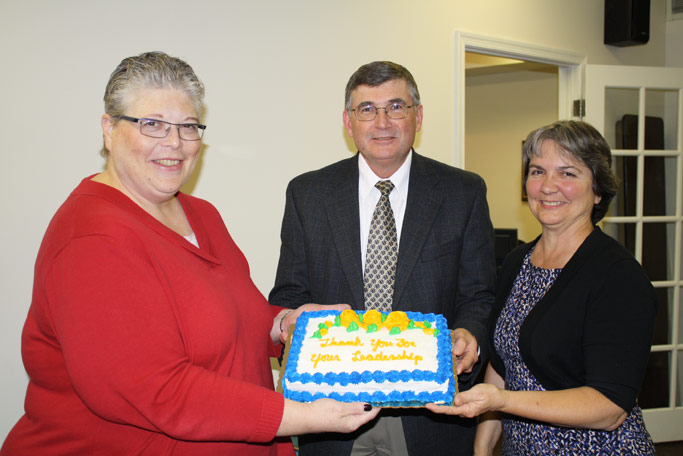 Board chair Phyllis Miller (left) presents a cake to Loren and Earlene Horst, thanking them for their long service to Virginia Mennonite Missions. Photo by Gloria Lehman