The Gospel Seen on the Canvas of a Life

Jason Wagner’s USA Ministries assignment as chaplain in the local jail has given him the opportunity to witness this beautiful story of transformation in the life of his friend Nathan. 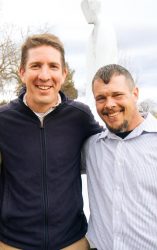 What does the power of the gospel look like when it is released in our local jail? It is most clearly seen etched onto a living canvas. One portrait that is particularly close to my heart is that of Nathan.

Nathan’s story begins with elements common in the jail: absent father, troubled childhood, early drug addiction, and many broken relationships. But Nathan’s story is also unusual. Upon the recommendation of Mt. Clinton Mennonite Church, Nathan requested a visit from me. Mt. Clinton was his mother’s church. Members had been writing letters; one of the church elders had been visiting him. It’s clear that before I even met Nathan, God had a hold of him.

While detoxing in his cell, Nathan listened as a fellow inmate read the Scriptures out loud for his pod to hear. The Word of God began to sink into his heart. During our first meeting Nathan described a sleepless night of deep anguish in which he felt the weight of his sin. Not knowing what to do, he cried out to God for mercy. After praying fervently, he felt a sense of peace and found that he was able to go to sleep. What happened in the following days and weeks is truly miraculous.

Nathan began to come out into the light of God, sensing deeply that God was calling him to make a change. He wrote to Mt. Clinton Mennonite Church asking for forgiveness, confessing to them his struggles and naming his gratitude for their support. He began to study scripture with a deep hunger and brought question after question to our one-on-one counseling times. Through much study and counsel, Nathan grasped the cost of becoming a follower of Jesus.

Throughout this time, the stress of pending court dates and the possibility of 20 years behind bars was hanging over him. But at each court appearance, Nathan could look out into the public area and see a group of members from Mt. Clinton attentively listening for his outcome.

Mercifully, he was able to get out on bond for three months.

He was a different man. His eyes were clear, and his heart was hungry for change. During those three months, he became a sign of God’s redemption and hope in many places. Nathan became an integral part of Celebrate Recovery, a Christ-centered recovery program. A small group from Mt. Clinton gathered bi-weekly around Nathan, offering encouragement and accountability.

Nathan was finally given a miraculously light sentence of seven months in prison. During that time of incarceration, Mt. Clinton Mennonite Church paid his rent and cared for his dogs. Nathan, for his part, read the whole Bible and worked through a 52-week Bible study. When he was released later that year, he stood before the Mt. Clinton Mennonite congregation, gave his testimony, and was baptized. Friends from all over the community whose lives he had touched were present, witnessing the miracle.

It is not easy to trace the work of God’s salvation within the jail. Within Nathan’s story I see many threads of God’s intervention. The presence of an active church. The word of God permeating Nathan’s heart from the voice of a faithful believer behind bars. The Holy Spirit bringing conviction, peace, hope, and forgiveness in Nathan’s night of anguish. Nathan’s soft heart that was willing to confess, seek help, and rely on those God had put in his path.

All these culminate into a picture of the power of the gospel, salvation made visible on the canvas of Nathan’s life. One last picture of Nathan’s redemption that has brightened my heart: one evening after hosting Nathan for dinner, he rushed off to a worship service. During the worship time, Nathan accidentally “pocket-called” me. When I picked up my phone, I quickly realized what had happened and listened in for a moment. What I heard was Nathan loudly singing, “God, You are good!” May God receive the glory and the praise!