Catching the Wind of the Spirit: VMMissions Celebrates 100 Years

Posted on November 11, 2019 by VMMissions Staff 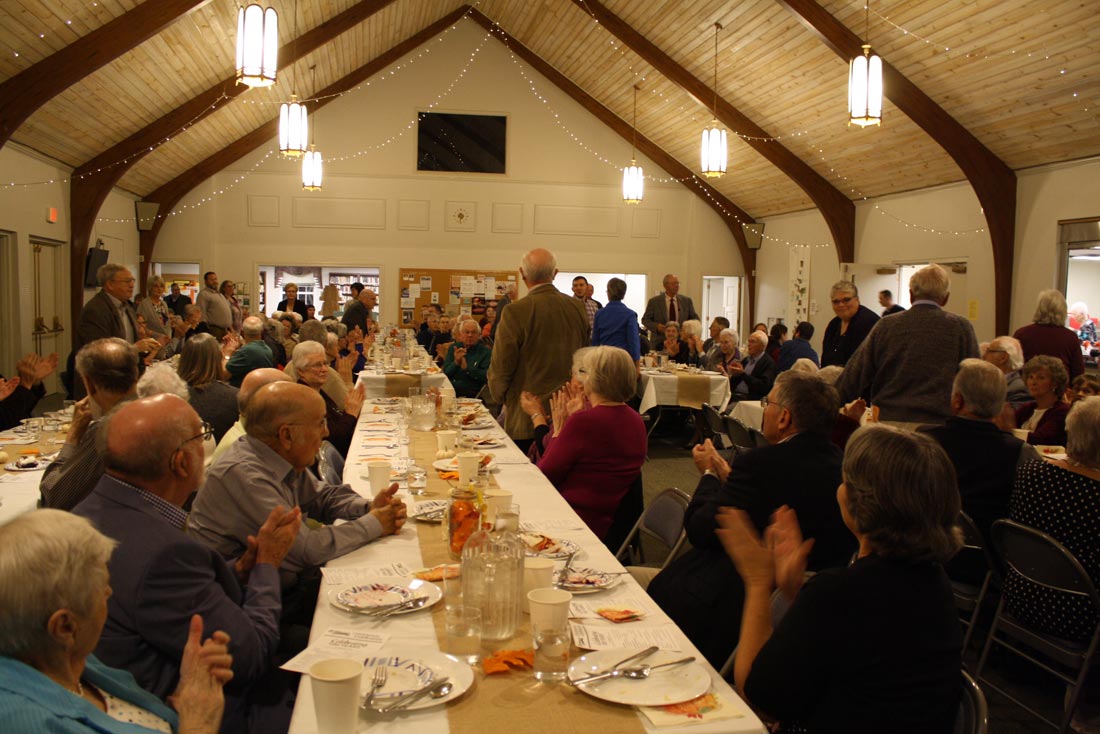 Current and former members of the board of VMMissions are recognized at the Donor and Prayer Partners Banquet. Jon Trotter

Hundreds gathered to celebrate the centennial year of Virginia Mennonite Missions in Harrisonburg, Virginia, during the first weekend in November.

Leaders from the Italian Mennonite Church, the Jamaica Mennonite Church, and the Mennonite Church of Trinidad and Tobago were in attendance, in recognition of the key role that VMMissions has played in their own histories. They were featured guests at events that included a reunion brunch for present and former workers, staff, and board members, a banquet to honor financial and prayer partners, an evening worship service, and a Sunday afternoon a cappella concert. 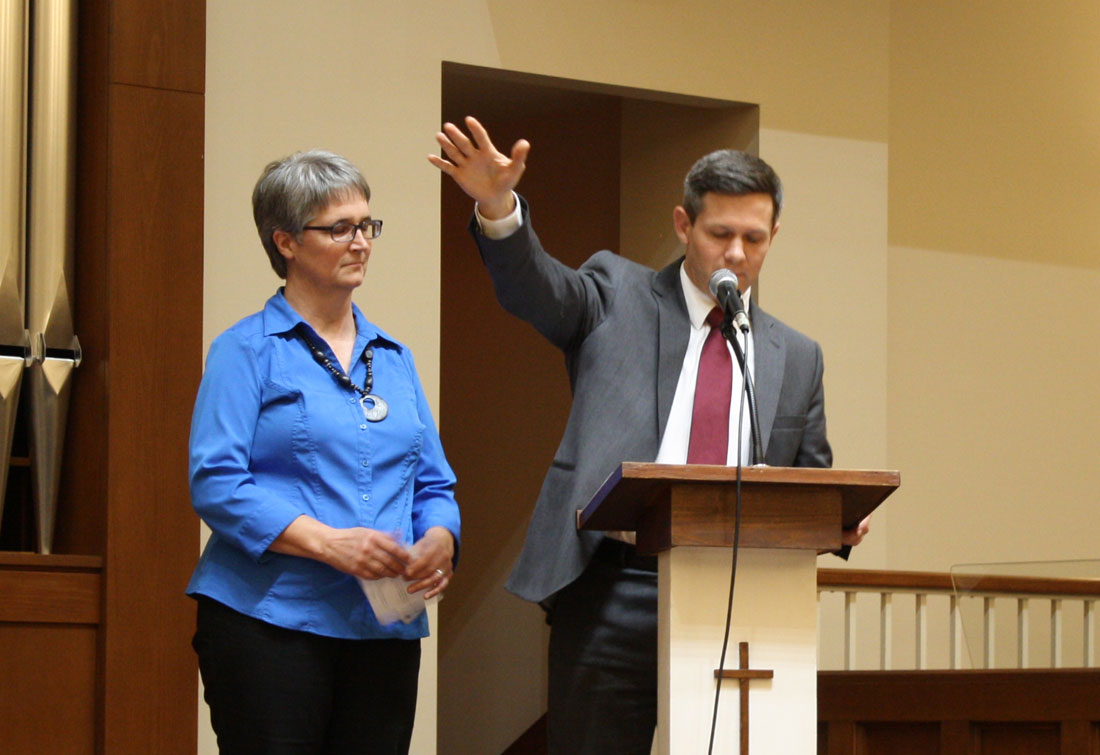 President Aaron Kauffman framed the entire celebration with the image of a sailboat. “The church in mission is like a boat,” Kauffman explained, “built upon the good news of Jesus, powered by the wind of the Spirit, seeking the far horizon of God’s new creation.”

In his opening remarks, Kauffman referenced John S. Coffman as Virginia Mennonite leader whose “sails” were up to catch the wind of God’s Spirit in the Shenandoah Valley after the Civil War. Coffman and other itinerant preachers made grueling forays over the mountains into West Virginia to hold evangelistic meetings in schoolhouses, resulting in the emergence of over a dozen Mennonite churches. Following one such trip in 1880, Coffman wrote, “What we need is home mission work. … A mission board should be created and evangelists should be sent out under the care of the board.” It took nearly four decades, but Virginia Mennonite Board of Missions and Charities — now known as VMMissions — came into being in the fall of 1919.

After thirty years of outreach throughout Virginia, West Virginia, Tennessee and Kentucky, God opened doors in surprising ways for VMMissions to share the gospel in Italy and Jamaica in the 1950s. Relationships in these locations eventually led to expansion into Guyana, Trinidad, and Belize in the Caribbean, as well as Albania, Kosovo, and Montenegro in the Mediterranean. Fifty years later, VMMissions again expanded its reach by sending long-term workers, often in partnership with other mission agencies, to under-accessed locations in Asia, Europe, and Africa. Most recently, through its short-term program, E3Collective, VMMissions has sent teams to Jordan, Greece, Kenya, and Thailand as a specific means of engaging the worldwide refugee crisis.

Francesco Picone, with his wife Martha, shares the story of how he came to faith through the influence of Mennonite missionaries in Italy. Jon Trotter

Francesco Picone, President of the Italian Mennonite Church, cited connections in his childhood with the early missionaries as the source of his own his lifelong commitment to Jesus Christ and the church. He presented a recently published copy of Menno Simons’ works in Italian as a gift to commemorate VMMissions’ centennial.

Likewise, William George Broughton, President of the Jamaica Mennonite Church, spoke with deep gratitude for the witness he encountered among the Mennonites, enabling him to be born again. “I was brought from religion into new life in Jesus Christ,” Broughton said. He expressed appreciation for the ongoing support from VMMissions after Jamaicans like himself assumed leadership of the work.

Deolal Ramdial, President of the Mennonite Church of Trinidad and Tobago, recalled Dr. Richard Keeler, whose ministry among leprosy patients resulted in some of those patients coming to faith in Jesus. It was one of those former patients who shared the gospel with a Hindu boy who lived across the street — Ramdial himself. “May our partnership with VMMissions continue to the end,” Ramdial concluded, “until the return of our Lord Jesus Christ!” 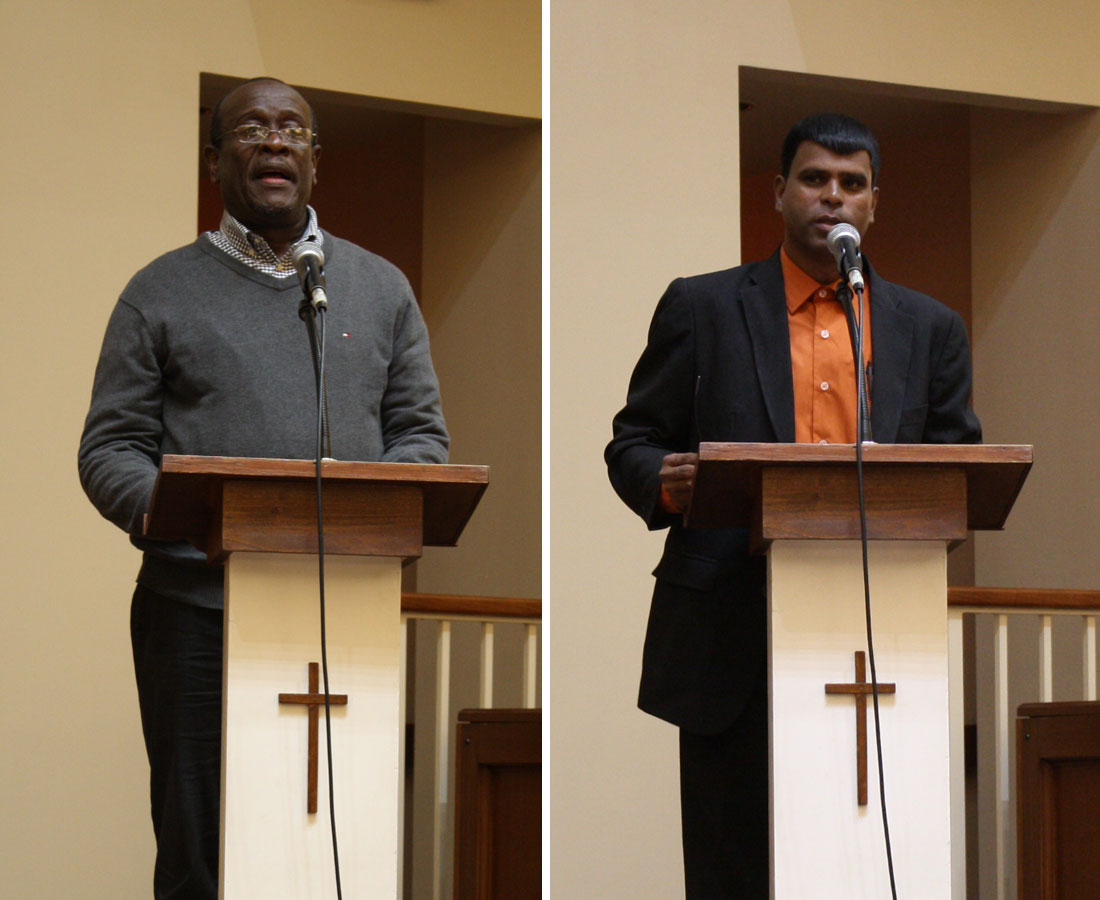 International partners William George Broughton (left) from Jamaica, and Deolal Ramdial from Trinidad, shared greetings and reflections on the impact of their long relationships with VMMissions. Jon Trotter

Both the brunch and the worship service were full of compelling testimonies, some humorous, others heart-wrenching. Casey DeYoung, recently returned from her second short-term trip to Lesvos, Greece, held in her hands a woman’s scarf she had retrieved from the piled debris of life jackets and rubber boats on the shores of the island. It was a moving reminder of the countless people from war-torn Syria who have risked and lost their lives in their search for safety.

Yugo Prasetyo, a long-term worker in a slum in Southeast Asia, asked poignantly, “How will we be agents of reconciliation among the one in seven persons in our world who live in slums? If we call ourselves followers, we will follow Jesus into the slums. What entitlements do we need to surrender?”

Former VMMissions President David D. Yoder shared his deep sense of gratitude for the beauty of a network of good, lifetime relationships in which there has been an experience of divine orchestration. “It is wonderful to see these relationships and to see a new generation carrying vision,” he said. 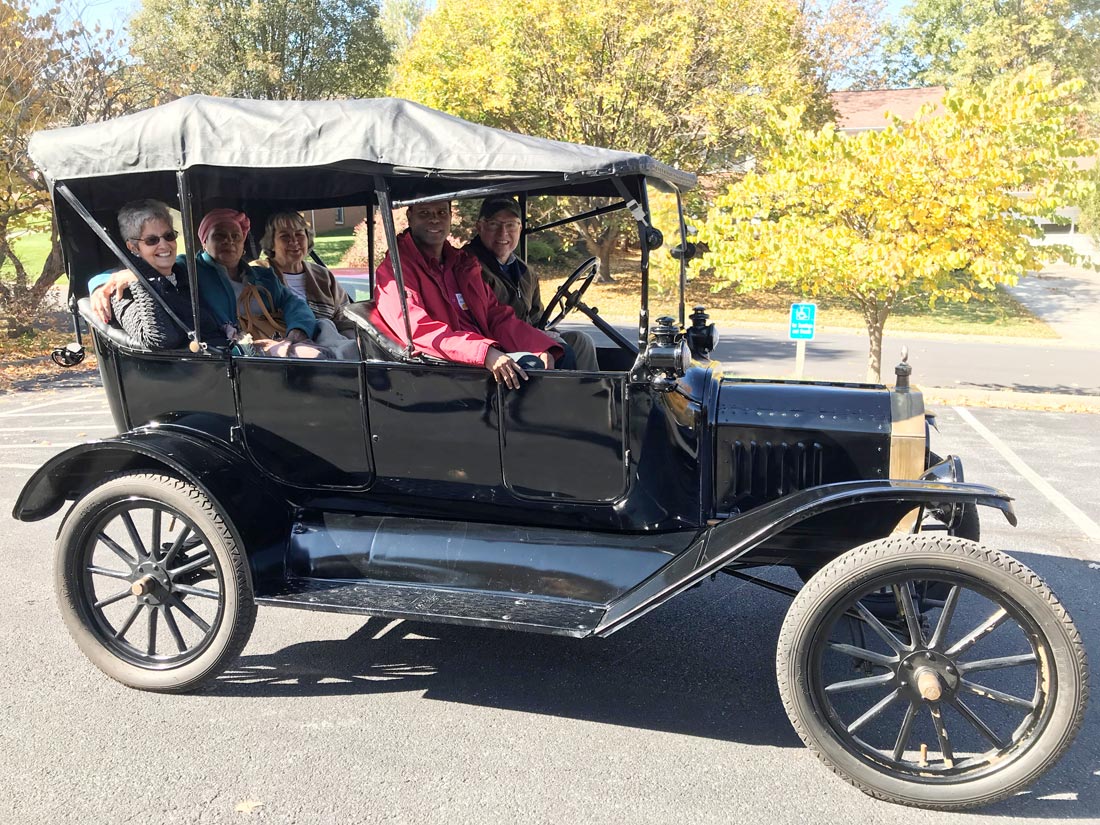 A unique component of Saturday’s events was the offer of rides in a 1916 Ford Model T. Owner and operator Eldie Suter reflected, “It was a terrific event and I only heard good comments. It was a fun day!”

The Saturday evening program premiered a 30-minute centennial video entitled, “The Wind of the Spirit,” featuring past and present workers and staff. Especially meaningful were the reflections of Melba Heatwole regarding the lifelong impact of her service in Jamaica. Heatwole passed away in September, just months after being filmed for the video. Copies of the video, along with a special centennial edition of VMMissions’ Transforming magazine, were given to those in attendance. Additional photos and stories are available online at 100.vmmissions.org.

Rachel Yoder, current worker among college students and young adults in Harrisonburg, Virginia, expressed enthusiasm for what God has done, is doing, and will continue to do, with a closing comment that brought applause: “Let’s do another 100 years!” 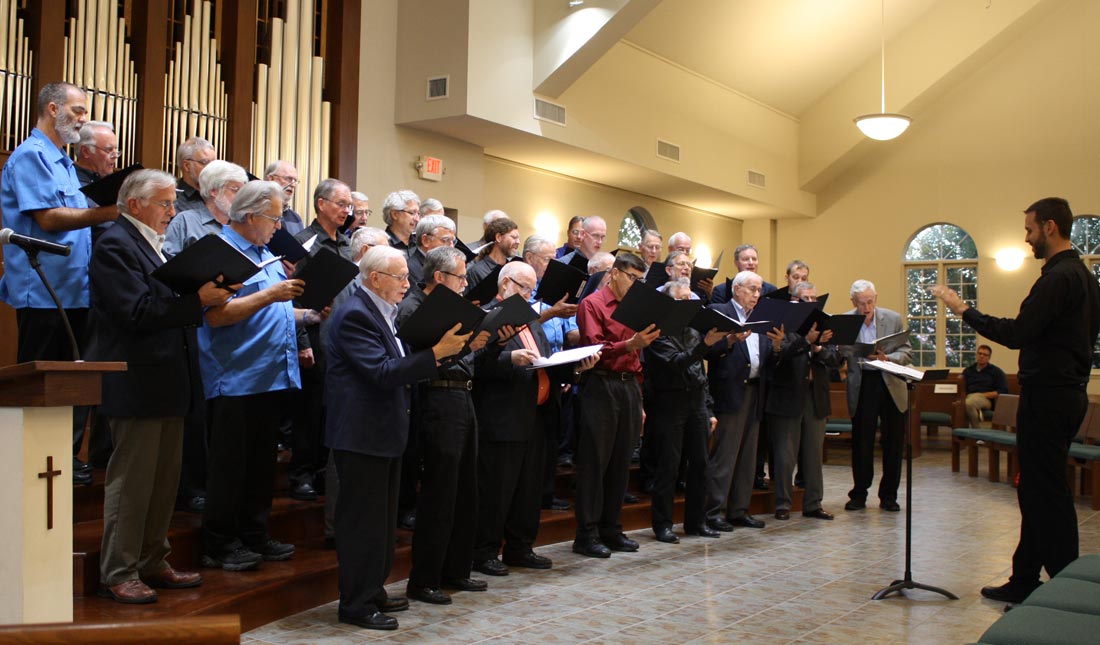 A mass chorus of combined groups led by Nathan May sings at the finale of the 18th annual Festival of Praise, part of the centennial weekend celebration. Jon Trotter

See more photos from the weekend: 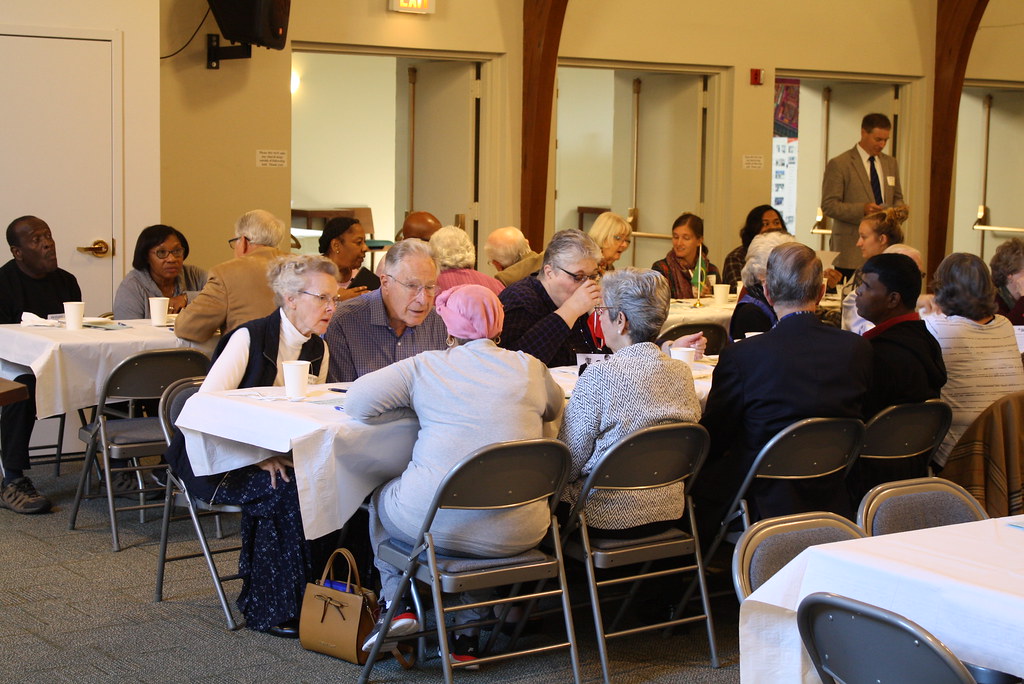