In Ecuador, an amazing reunion

The fifth man that I interviewed came into my office like everyone else. He began to explain his situation and we talked for about 10 minutes before I asked him the question, “what kind of work did you do in Colombia?”

He opened his jacket and showed me the t-shirt that he was wearing that had a picture of a clown on it and the title Ecopayaseando por la tierra (Eco-clowning around the world). “I was a clown,” he said.

My heart skipped a beat. I recognized that clown in the picture and I recognized that title. “I met you in Colombia,” I said. “You were at a meeting that I attended while I was on a Witness for Peace delegation. Our group was wearing blue t-shirts and I talked with you and you gave me a free DVD of your clown show. Do you remember me?” I asked excitedly.

“Of course!” he responded as he fell to his knees giving thanks that he had run into someone familiar. The tone of our conversation changed after that. We were both taken back by feelings of joy caused by the unexpected coincidence.

I had met him just one year earlier in August during the Witness for Peace trip at a community organizing meeting to help displaced people. Since then his work with the displaced population and the local police force had gotten him into trouble. After a car bomb went off at the police station in his hometown earlier this year and he was threatened, he was forced to leave Colombia and came to Ecuador.

Now living in a homeless shelter, he is trying to make a new life in Ecuador and we will be accompanying him. It was an amazing coincidence. The world seems to shrink with these experiences and the community of solidarity seems to grow, and I’m thankful for these stories. 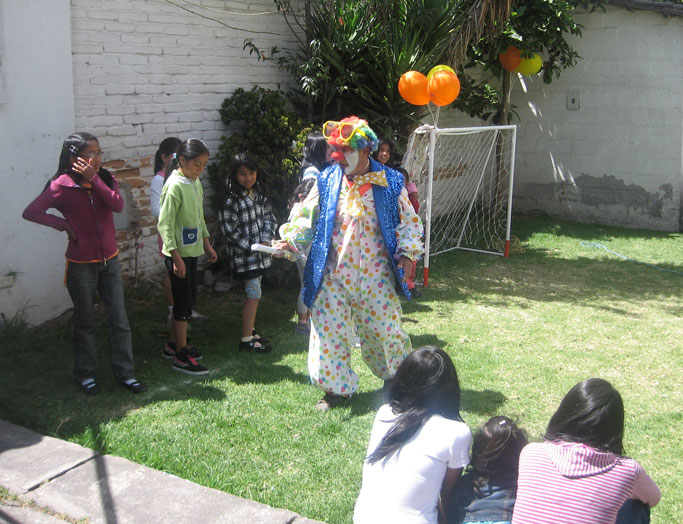 The Colombian man, a clown, who David met as a refugee in Ecuador.
Photo courtesy of author