Laura Campbell recognizes that the gospel has the power to confront the cultural attitudes about women that are prevalent in Montenegro.

Laura (left) and women at her table discuss how their identities as women have been formed. Photo: Martina Petkovski

“Who can find a virtuous woman? For her price is far above rubies.”
Proverbs 31:10 (KJV)

God tells women that we are valuable to him, more precious than rubies. As believers, we know we have worth because God created us in his own image, breathed his own breath into us, and redeemed us with the blood of his Son. But in Montenegro, women are treated as if we are not worth much at all. An acquaintance here told me several times that because Steve and I only have daughters, we are obligated to have a son, someone to carry on the family name, and presumably provide for us when we are older.

One result of these long-standing cultural attitudes is the fact that Montenegro has the highest rate of sex-selective abortion of baby girls in all of Europe. Demographic statistics confirm that while the global average for newborns is 100 females for every 102 males, in Montenegro, the average for newborns is 100 females to 116 males. (See this Al Jazeera article about Montenegro’s problem of sex-selective abortion.)

Jesus also lived in a culture that undervalued women, but he never undervalued the women he encountered. Jesus spoke not only to women, but to those women who were especially beneath the notice of society—the Samaritan woman (John 4), the Canaanite woman (Matthew 15), and the woman caught in adultery (John 8) were all treated with disdain by those around them. Jesus treated them with respect. He gave them value. To him they were priceless. It is our desire to have the power of the gospel break the cultural stereotype that women are not as valuable as men. Our desire is to show women their God-given value.

With this in mind, the women’s committee of our church (The Word of God Evangelical Church of Podgorica) decided to conduct our first-ever outreach event. Our plan was to invite not-yet-believing women to be our guests at a special luncheon and then offer to follow-up with friendship and discipleship for those interested.

Our theme verse was Proverbs 31:10, but because rubies aren’t well known here, we chose the name “diamonds” for our group. We invited all of the women who brought children to the Operation Christmas Child shoebox program, approximately 1000 women! Of those, 178 expressed interest in the event, which was scheduled for Saturday, March 7, in order to align with International Women’s Day on March 8. We divided the names of these ladies among believing ladies from our church and prayed for them daily. We also encouraged ladies from the church to invite some of their pre-believing friends—as many as they felt they could disciple. We also invited ladies from the other churches in Montenegro, and those to whom they wanted to reach out.

It was our desire to make this event reflect the value that God places on each woman. We rented a large event hall at an upscale local hotel and arranged for a catered meal. Each table was decorated. In addition, each woman was given a gift of handcrafted jewelry made by a man from our church, and a rose. These gifts were well received; I saw several women replacing their current earrings with the new ones, and many others comparing and praising the designs.

We started our time together with an icebreaker which provided for some lighthearted interaction and helped us to learn something about the women we were meeting for the first time, and even learn some new things about our long-time friends. 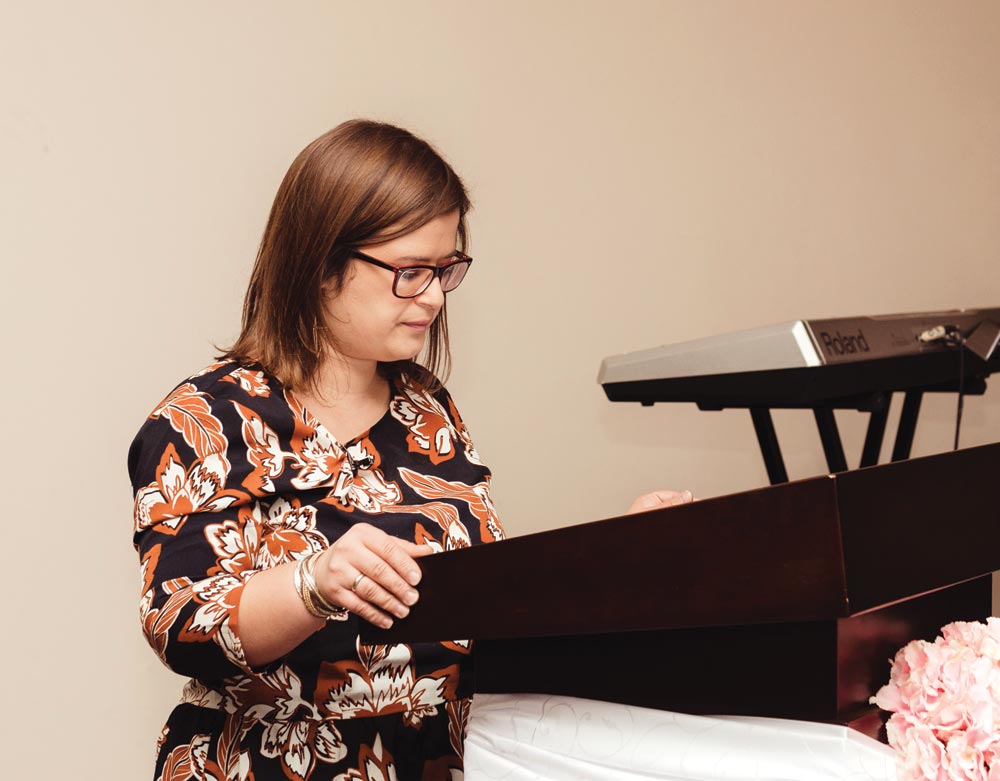 Maša Simonović, a woman from the Campbells’ church, sharing her testimony at the Diamond luncheon. Photo: Martina Petkovski

Maša Simonović, a woman from our church, shared her testimony of times when God has been especially close to her throughout her life, including when she was a young teen who had just lost her father and was afraid her mother was dying as well. She shared how God appeared to her at that time in a personal way and connected her story with the forgiven woman in John 8. I could see many women moved by Mašа’s story, even to the point of tears. Our committee asked Jelena Vilotijević, a believer with a gift for drama who attends the church in Nikšić, to read Jon Jorgenson’s “Who you are: A message to all women.” This is a riveting word to women who have not understood their value in the eyes of God.

After Maša’s testimony, we sat at our tables and discussed several questions about what has shaped us into who we are today and what might be keeping us from seeing our worth. We had encouraged the believers beforehand to be very transparent and open in their sharing, and this led the new ladies to also share more freely. As this was only a two hour event, and many of these women were new to the concept of Scripture, we were not able to delve deeply into what the Scriptures say about who we are, but our hope and desire is to develop these relationships and disciple those who are willing.

Two women who serve with Cru in Montenegro, and Izabela, a woman from our church, sang several songs, including translated versions of several contemporary Christian worship songs that remind us of our worth to God.

Reflecting afterwards, we rejoiced to realize that 50 of the 140 ladies who attended were “not-yet-believers,” with 25 of those being among the 178 who initially expressed interest. Some had had to cancel because of illness (not coronavirus). But this allowed us to say yes to a few people who asked at the last minute if they could bring friends. We were delighted to have ladies from all different parts of former Yugoslavia—ladies of many different ages, nationalities, ethnic groups and even religious backgrounds. Some had come to Montenegro as Roma refugees from Kosovo years ago, others from Muslim families.

Marijana, and Miruška, two of the women leaders of our church, plan to be in contact with each of the 25 non-believing women who attended from the shoebox program invitation as well as those who wanted to come but were unable to. They plan to invite them for one-on-one coffees or visits that include other believing women. Believers who brought pre-believing friends are expected to disciple those ladies. Of course with the current world situation, going out for a coffee and other normal meeting occasions have to be put on hold. Please pray that we will still be able to do effective follow-up without being able to properly meet with one another.