Worker J.T. shares about the multiple benefits and blessings of being a graphic designer in his South Asian context. 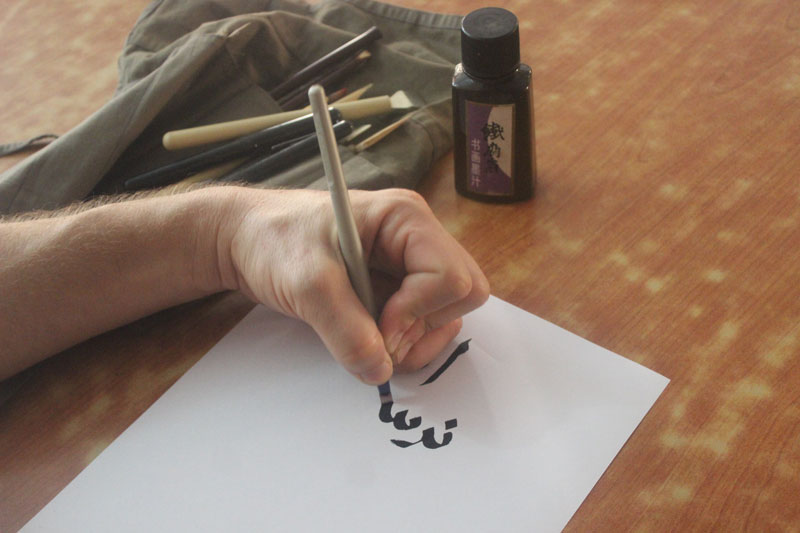 Almost twenty years ago as a university graphic design major, I was eager to get my degree finished so I could move on to full-time ministry. As much as I enjoyed graphic design, I saw it as a consumeristic tool for convincing people to buy junk they didn’t need with money they didn’t have, and I was ready to leave it far behind on the mission field. I wanted to live by faith among the unreached instead.

Five years of immersion into language, culture and ministry challenged a lot of my ideas. I saw that one of the biggest things hindering the growth of the church in this unreached country was an unhealthy dependence on foreign funding. Out of thousands of believers and dozens of churches, I didn’t know any that weren’t heavily reliant on foreign funding for their ministry activities.

There were so few examples of believers working a regular job and volunteering time on the side in ministry while contributing funds to the church, which I see as a core part of a healthy church. But had missionaries modeled how to work a normal job while serving the church simultaneously? Not really. 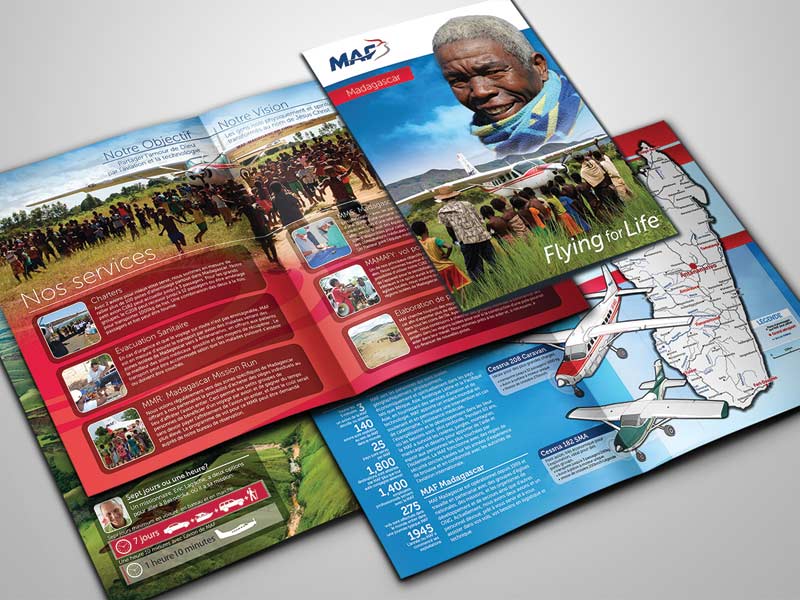 A sample of J.T.’s professional work in graphic design. This is a French-language brochure for Mission Aviation Fellowship (MAF) in Madagascar. Courtesy of author

I realized that I can bless the church and the country by putting my professional skills to work, modeling a theology of work alongside active ministry, and training believers professionally as well. This puts me into natural workplace relationships with Muslim peers.

At the same time, I need a long-term visa in this restricted-access country where being a missionary among the majority population is not allowed. I teamed up with a friend who started a media business in a job role that seems to be a tailor-made niche for me. I get to have an employment visa in a restricted-access country with only a 20 hrs/week work requirement. As an employee in this business, I spend roughly half my time working on Christian media projects to broadcast the gospel, and half my time with secular projects for Muslim clients.

It takes an unusual amount of self-discipline to be effectively bi-vocational. I get absorbed in projects, and often my family gets the short end of the stick. Likewise, in the balance between ‘work’ and ‘ministry’, ministry often gets sidelined because it’s not as strictly policed. I find it helpful to keep track of my business-related work time with time-tracking software so I can better understand and evaluate how I am spending my time.

It has been a real joy for me to be involved in discipling youth holistically in both career skills and spiritual maturity and service to the church. Ten years ago a high school student I was mentoring had dropped out of school and was not doing much of anything. After teaching him graphic design skills, I mentored him in operating a successful multimedia business.

He’s still doing great professionally, but more than that, I’m overjoyed to see him continue to serve the church sacrificially with time and money. My bi-vocational ministry allows me to model this sort of lifestyle to believers and empathize in a deeper way with the everyday challenges of doing this.

In our home, I often help with the bread making, especially with getting the yeast the right temperature. Yesterday, I got it just right and the bread rose to a record height. Jesus used yeast as a metaphor for the kingdom, a slow and inconspicuous ferment that gradually permeates society. Is it this slow and inconspicuous influence that business people are in a position to bring?

One little-known hero of mine who had this kind of “yeasty” impact on Japan was William Merrell Vories. Vories was trained as an architect, and went to Japan, intending to win people to Christ in the remotest parts “too inconspicuous to appeal to any other missionary.” 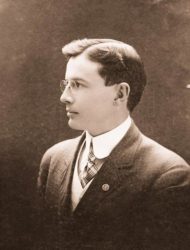 He got a job teaching English in the Shiga Prefecture, and in his off-hours led a Bible study and made converts among young men. This lost him his job, so to earn an income, he started an architectural company with the ostracized converts as his apprentices.

Within a short time, Vories and his band were running the most influential design firm in Japan. He discovered how to build buildings that could withstand Japan’s frequent earthquakes. By the 1950s, his firm had built around 1,600 buildings.

Vories and his apprentice-disciples formed the “Omi Brotherhood,” and even though they were making substantial money as architects, they pledged to live on an average of $62 per month, regardless of their role in the company. They poured the remainder into evangelistic and humanitarian initiatives. They put dozens of pastors through seminary, established churches and preaching points, founded schools, and preached in villages on evenings and weekends. Vories focused on demonstrating practical “Christianized economics” in his time.

This is something that inspires me as I work professionally with script and design. It is deeply satisfying to “put to work” these gifts God has given me! The people we live among passionately love their language, and while Islam suppresses it and considers it unfit for spiritual matters, Christianity has a unique legacy of encouraging and developing languages. Two hundred years ago, Christians started the first schools that used the local language, and pioneered printing with the first vernacular books and newspapers. According to current non-Western missiologists, this local-language missionary effort sparked a cultural renaissance that eventually overthrew colonialism.

With my type of design work, I get to continue in this “cultural mandate” of developing this language and while doing it, share with my Muslim colleagues this beautiful heritage of how Christianity uniquely uplifts languages. 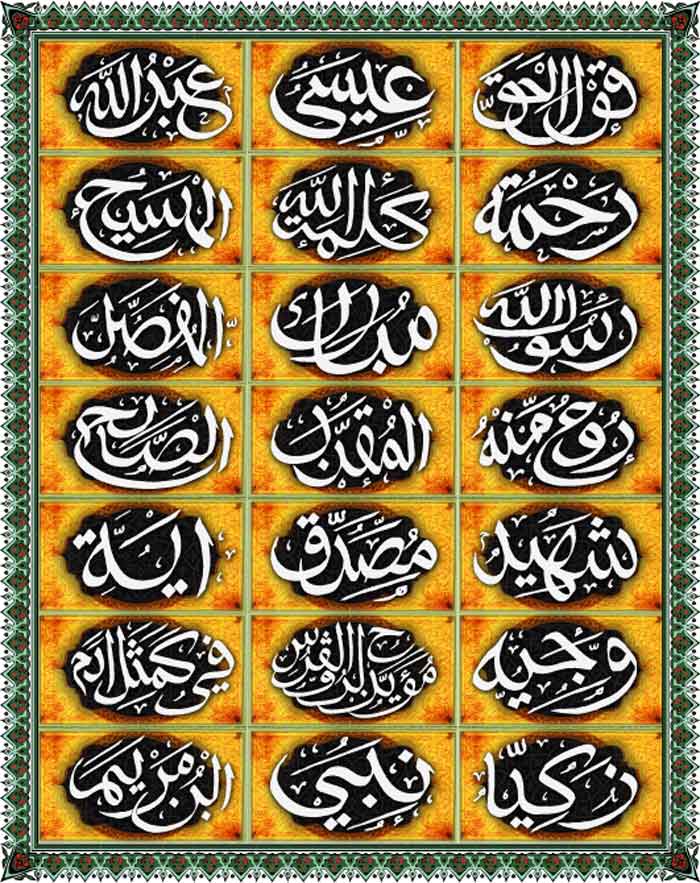 J.T.’s calligraphic presentation of the 21 names attributable to Jesus in the Quran, such as Word, Blessed, Miracle, Messiah, Righteous, Prophet, God’s Messenger, etc. Courtesy of author

God has called me to devote my life to this vastly under-reached people group. He is calling others as well. The process of discerning the particular niche that matches gifts, needs, and opportunities can feel prohibitive and scary, especially when engaged from a distance. If you feel God nudging you to an unreached people group, the best option is often to just dive in first as a cultural learner. Far and away the largest factor correlated with tentmaker effectiveness is linguistic competency. We’ve seen time and again that those who put their career plans and preferences on hold in order to prioritize language and culture study under a temporary visa option for a couple years come out on the other end with a surprisingly good niche fit they wouldn’t have known about if they had come and expected to immediately implement a business plan.

VMMissions worker J.T. serves in bivocational business for transformation ministry with his family in a major city in South Asia.