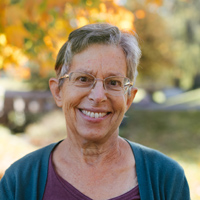 On August 31, Carol Tobin retired from her staff role as Mission Advocate and Transforming Content Editor. Though her formal role has ended, she will continue in volunteer roles for VMMissions, including helping to coordinate the upcoming Perspectives course and local missions recruitment efforts. VMMissions is grateful for her many years of faithful service on staff.

Carol served with her husband Skip and family for 16 years in Thailand with Eastern Mennonite Missions in the northeastern province of Ubon, among the Buddhist-majority Isaan people. In 2005, they became jointly appointed with VMMissions. After ending their assignment in Thailand, they became VMMissions staff members. They are parents of six daughters, several of whom are current mission workers with VMMissions in Asia.

“When Skip and I put roots down in Harrisonburg, after our many years as church planters in Thailand, I was very grateful to have the opportunity to actually do things here, instead of forever telling people what we were doing someplace else. There was no way that our missional habits were going to end when we left!” she noted.

Carol found herself still focused on mission connections in Asia when she joined the staff of VMMissions in 2010 as Global Ministry Associate, and later as Asia Regional Director. In 2020, she became Mission Advocate, which encompassed mission recruitment and many facets of promotion and mobilization. With a strong writing and editing background, she took on the role of Content Editor of this publication until her retirement.

Filed in: All posts, News, Transforming