Discipling others to tell the Story

It started with a simple request from Pastor Joi, “Please help us make a list of methods Jesus used to make disciples.”

I felt led by God to summarize Jesus’ disciple-making methods through a survey of the Gospel of Mark. The next day, I walked through an outline with them and asked them to study it on their own. We agreed to meet again three days later. They asked me to use the methods I had outlined as a way of preparing them for what they would teach.

Specifically, they wanted me to model how I would use the points, share from the passages cited, and include examples from the church’s experience in making disciples. After modeling Jesus’ method, they then followed my example and practiced. 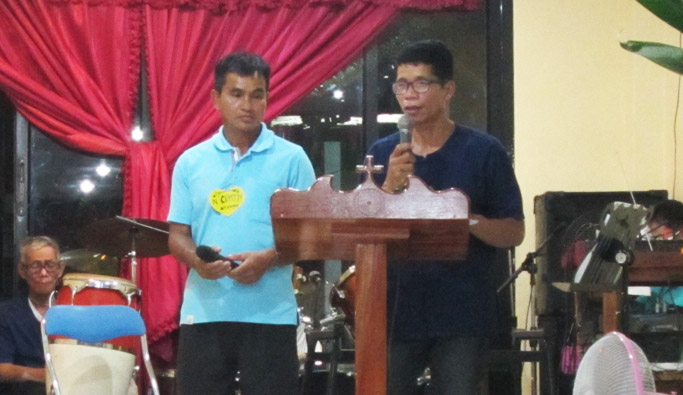 Pastor Joi and Phonthawee speak from the Gospel of Mark about making disciples.

The conference began two days later. The afternoon was hot and long, but by God’s grace, Joi and Phonthawee held people’s attention and we walked through ten chapters of Mark!

After showers, supper and worship, people were refreshed and ready to complete the Gospel story. The Holy Spirit empowered Joi’s words and he spoke with authority and passion. Those present were inspired again by the power of the resurrection and the charge for the disciples to go and make disciples.

I was thrilled and returned home full of thanksgiving. I was entirely in the background, but I have been given the opportunity to walk with them in their preparations, and in so doing, not only building them but also many others who are about the work of making disciples. Thanks be to God!