Dwelling in unity in a divided land

Posted on September 18, 2012 by VMMissions Staff

Photo: The Israel/Palestine group near the Temple Mount, standing on an ancient road through the market area. Jesus would have walked here. Photos courtesy of Phil Kniss.

This year’s Partners team to Palestine and Israel embarked on a twenty day journey focused on studying the role of Christians in the realms of Empire. Through home-stays with both Palestinians and Jewish settler families, members of the group engaged poignant questions like: What are the roles of Christians in the midst of conflict? What is the essence of the concept of security? Ultimately, we worked to develop a response to this broader inquiry: How does the life of Jesus in first century Roman-occupied Palestine correspond with life in twenty-first century Palestine and Israel?

It is the chief role of Christians to be a source of unity in a place where division is the status quo. We arrive at this place by means of another paradox: The message and actions of Jesus are undeniably political in their manifestation but the impetus of Jesus’ message and actions are undeniably apolitical in nature. How are these seemingly oppositional claims reconciled? Sitting just a stone’s throw from the Temple Mount, our team converses, recognizing that politics play a role in reaching an end to the conflict and that our actions as Christians in the region have political implications. Despite these realities, we discuss our personal reluctance to present political solutions. Instead, our choice remains to unyieldingly focus on the furthering of the Kingdom of God through building relationships with those we encounter.

To this end, we challenge each other with questions about our roles as believers through the stories of the individuals we have befriended along the way. Could it be that the Kingdom of God works toward its fulfillment as we spend time celebrating Shabbat in the homes of gun-carrying Israeli settlers or sharing in worship with the same folks in a make-shift shipping container synagogue? Is the Kingdom of God realized partly in conversations with Israeli soldiers who command platoons of “warriors” against new friends and families we have encountered during our times in the occupied cities of Bethlehem and Beit Sahour? Likewise, is the Kingdom furthered as we spend time in the homes of families who know individuals who have acted violently against the Israeli military and civilian presence in the region?

Each sounding returns with the definitive answer that it undoubtedly is. The Kingdom of God is realized, in part, through the building of community between those who are perceived enemies. The ministry of Jesus is rooted deeply in authentic encounters with people of all kinds who need to hear the same message; Jesus is Lord. This proclamation both challenges and supersedes political ideologies and actions past or present. It reorients the discussion of a solution to one of salvation and as a result, allows for the recognition of all people as creations in the image of God.

We departed from Jerusalem, considering the call of the Great Commission, asking ourselves what the next step in this adventure might be. How might we continue to partner with those we have met; to do more than simply tell others their stories? How might we best represent the Kingdom of God to those who live in the place where the story of Jesus took place?

In many ways, these questions remain unanswered aside for this seminole acknowledgement: The kingdom of God is this, to engage the people of all empires in the way of the Cross and to act in benevolence on behalf of all parties to share its message of hope. Our facilitation of unity in the face of hopelessness, anger and division is nothing short of the work of God among the nations. Through it, we challenge empires and individuals to consider the sanctity of human life, the value of different cultures and the promise of God’s redemption of the world. We recall the words of Psalm 133 and echo the Psalmist’s assurance, “How good it is for brothers and sisters to dwell in unity.”

This journey to Israel-Palestine, as a group of six new-found friends from the Harrisonburg area, fulfilled a life-long aspiration for Irene and me. This was no “Disneyland” tour of the Holy Land, like many busloads of Christians we saw, who swooped in and out of tourist sites and shrines with scant awareness of the local people and culture.

We lived with West Bank Palestinian families for six days, lived with Jewish settler families for a weekend, visited a refugee camp, drove through war-ravaged Golan Heights, volunteered at organizations. We worshiped in churches and synagogues, and breathed prayers for peace upon hearing frequent Muslim calls to prayer.

Once I shared a public bus seat with a young Israeli army commander, an M-16 rifle resting on his lap. My conversation with him was deep and mutual and lasted one-and-a-half hours, touching on family, faith, peace, warfare, and the relationship of religion and politics. I returned grateful for the opportunity to see this beautiful and complicated land up close, and to make new Palestinian and Israeli friends. How I absorb the daily news will never be the same. 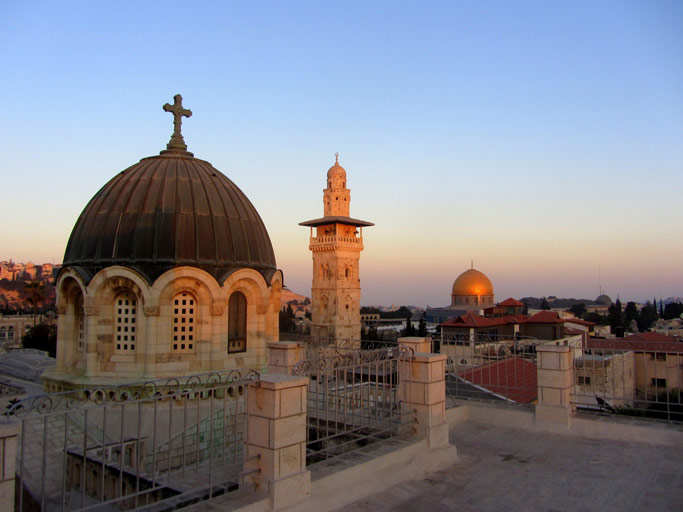 Photo: The old city of Jerusalem.