Last December, I was part of a team that took 730 pairs of glasses and two pair of hearing aids that were donated to the Lion’s Club to Thailand. These were distributed among seven villages (six were Hmong and one was non-Hmong). The majority of the people who received the glasses were non-Christians, and it gave us a good opportunity to live and share the gospel.

In the village of Mae Sok, a man declared that his sight has been restored. This man has been a great shaman in his village for the last 40 years. He couldn’t see clearly, and has been searching for help, but didn’t have enough money to pay doctor fees. He had heard that I was going to his village to share the word of God. He then made time to come to greet me, and hoped that I could help him.

During our conversation he said, “Pastor Jonah, I hope that you have something good for me to take home.” My answer was, “I hope so.” He began to tell me his personal story of talking with several Hmong pastors in Thailand, and also with those who came from the U.S. But none of them had spoken like me. He wondered, why was I different from the others?

I told him that there was really no huge differences between me and those before me, but that I am a Mennonite. We all worship the same God, believe in the same Jesus Christ, and the same Holy Spirit. The man instantly became curious to know about these Mennonites who had supported my trip to Thailand, and why I was taking over 700 pairs of glasses to the Hmong people. He asked who paid for these and if he would have to pay to get some. 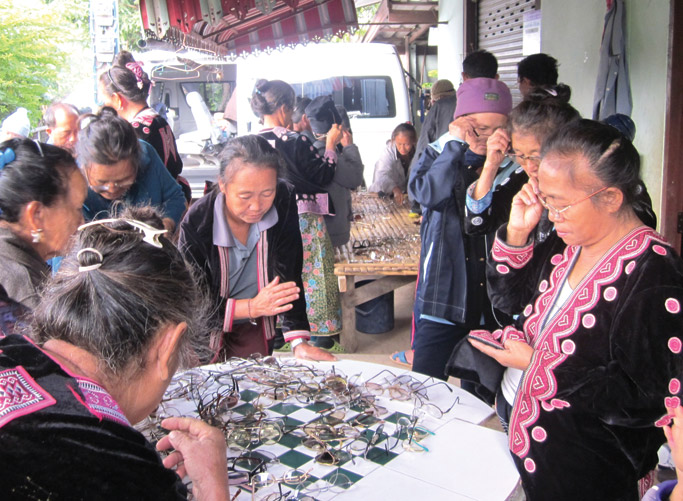 Hmong villagers sort through piles of donated glasses from a North Carolina chapter of the Lion’s Club. Photo: Jonah Yang

He got a pair of glasses for free. After our 30 minute conversation, the man thought about converting from his ancestors’ religion to Christianity. “But how?” he asked. “Who will lead me after I convert, and who will teach me the Bible?”

My response to him was, first, he must really think about walking a new path. What he had practiced in the past he cannot take with him. He must learn how to pray to God, obey His commands, find a church and faithfully attend. The man said, “I have over 20 relatives in the village, and they all depend on me. If I convert to Christianity, almost everyone will follow, but what is going to happen to those who do not want to become Christian? So I will wait awhile to learn more about Christianity.”

I wondered how long the man is going to wait. The time is here and now. Who knows what is going to happen tomorrow? It’s not his fault. We share responsibility. I wish we could send someone to this place in Thailand to teach them about God and the Bible. It is our fault that we often fail to share the gospel with the needy, or resources to send workers.

“The harvest is plentiful, but the workers are few. Ask the Lord of the harvest, therefore, to send out workers into his harvest field.” (NIV) I pray and hope that one day God will send someone to lead this man and his relatives to Christ.