Success Can Rise Out of Failure 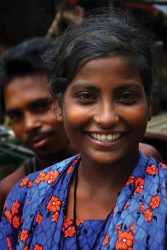 A few years ago, I was part of a vibrant discipleship group of women of Muslim background. Over the years, they built bonds of trust between them.

Two of them had teenage kids: Helena was the mother of Milli, a shy yet flirtatious girl with beautiful eyes. Malika was the mother of Chondo, a skinny boy who was more interested in computers than class. I was amazed when I heard that Milli and Chondo were interested in each other. The four parents talked it over together and agreed that in a few years (Milli was 15), the two could get married. Both Chondo and Milli attended one of our youth conferences, and I was glad to see that they were getting to know each other within a safe environment.

In village Islamic community, all romantic interest is taboo and teens are commonly married off by their parents with only a few days’ notice. I was thankful and proud that the believing community was finding a new way forward that gave the youth a chance to get to know their future spouse and model the ways a Christian marriage is completely different than an Muslim one.

One evening at the campfire, Chondo shared with me how he hears from God, and how at peace he was. Wow, now that’s success!

Months later, I found out that Chondo’s parents had married him off to a Muslim widow. I was shocked. Chondo had failed a major high school exam, and when Milli’s parents heard, they were angry and responded by marrying her off to a Muslim man instead of him. Chondo’s dad in turn arranged a quick marriage between Chondo and a Muslim widow named Ayesha. Ayesha was in her mid-twenties, with a toddler, grieving over the death of her husband in a road accident.

The relationship between the mothers, Helena and Malika, was completely broken.

Just when I rejoice at how good things are going, things fall apart.

I was furious. Chondo and Milli were both still in their teens. And to be married off to Muslims—how does that build the church? Now Chondo is supposed to be a parent when he isn’t even ready for marriage? And what if Milli’s husband refuses to allow her to read the Bible or be part of church? How could people in our own faith community act so vengefully and with so little consideration for faith?

This experience illustrates my struggle with success.

Just when I rejoice at how good things are going, at how much fruit is resulting from my ministry, things fall apart. I could easily name ten other situations similar to this one where seeming success crashed down into failure in the most disturbing and disheartening ways. They leave me bound up in grief, anger, and despair. I feel like quitting, and many times I have found myself creating distance from the people who have brought so much disappointment into my life. My attitude toward these “failures” is so often a failure itself: full of bitterness, hopelessness, and anger.

And yet the Lord is faithful. He is so patient with our bad years and our bad attitudes. He promises to never leave us, to never give up on us, and that patience extends to the brokenness of our brothers and sisters as well. Just like the Lord is patient and forgiving of my anger, so the Lord is patient with all his children who make a string of bad decisions that wreck others’ lives. And sometimes, against all hope, success rises up out of failures I had given up for dead. This kind of resurrection is work only Jesus can do.

After a year or two of marriage, Chondo and his wife Ayesha moved to our city. I was still angry and unwilling to engage with them. But Chondo kept bringing Ayesha over to visit and despite my attitude, I got to know her. Here was a girl, widowed before the age of twenty, which in South Asia used to be a death sentence. But she was given in marriage to Chondo, and to her surprise, she was loved and cared for, given freedom of dress, movement, and faith.

Her heart opened wide to Jesus. She asked me to help her understand the Bible better. So I began to disciple Ayesha. She, and her eagerness, drew Chondo deeper into trusting Jesus. The two of them were baptized, dunked in our bathtub last term.

That was a success! But the truth is that none of it has gone in the way I hoped for. I think the only success I can personally count is my increasing intimacy with this Jesus, friend of sinners; this one who is so patient with our striving for success.