Success Is Doing What Pleases the Lord

Nathan’s own story and example demonstrates a transformed life in Jesus.

What is success in recovery ministry? That’s a question I’ve had to think a lot about in the past few years as I’ve launched into ministry of my own. 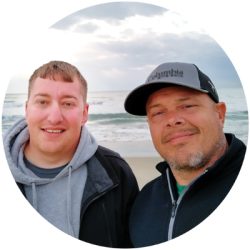 My cousin Lewis and I had barely talked for probably 15 years, but one day he called me to ask for help. It turns out he had seen the ways my own life had been changed, and that gave him hope of a different life for himself. He was heavy in addiction, suicidal, on the verge of losing his family and everything he had. He saw what had happened to me and was desperate to know how to do it.

I was in a position to help him. I had new skills in ministry through my work here at VMMissions, and more practice at leadership from running Celebrate Recovery meetings. God had given me someone to care for, and the tools to make a difference. One night I reached out to the church and called a meeting on Zoom for us to pray for Lewis. More than 70 people joined to lift up this man’s needs, and then joined our efforts to meet them. We got plane tickets to fly him and his son here from Kansas, helped him get settled here, found him a job, and connected him with a community.

He took that start and ran with it—God was working in his heart. I was just there to guide him here and there. The change was dramatic. He got his life together, he attended meetings, he built new patterns and new relationships. And as a result, his transformation inspired others to change too. The mother of his son, who had stayed in Kansas because of her own season of struggle, soon noticed the positive change, and decided to move here to join them. They’ve now been married for two years, and she is involved in ministry as well. Lewis has started leading a Celebrate Recovery group, and is considering a call to be a pastor.

This was a success. It felt close to my heart to shepherd someone with an almost identical story to mine, and pour out the kind of help and love to others that God had used to save me. He was leading the wrong life, and through my work God helped him find a right one. It leaves me feeling grateful that I could be in a position to give guidance the same way it was given to me. And Lewis’ story is one of many—guys I’ve sponsored who are now healthy, in leadership, starting their own groups. Some of these victories are dramatic, some of them are quiet. All of them are lives changed through the work I’ve been called to do.

But they’re God’s successes, not mine, as much as I’m grateful to be part of them.

My own definition of success has to run deeper than just a sense of accomplishment, or I’m not going to make it very far. Early in my ministry I fell into that trap of thinking I was the one who had to make things happen. I allowed people’s struggles to become personal to me, and I always felt I should have done more when someone relapsed. I put everything on my own shoulders, and it wore me out. I was forced to face the reality that I could only give them so much.

My own definition of success has to run deeper than just a sense of accomplishment, or I’m not going to make it very far.

I talked through my struggle and self-doubt with Pastor Margaret, my ministry mentor. Why wasn’t God using me to change the lives of the people I was working with?

Her response has stuck with me: “If he doesn’t use you today, he might use you tomorrow. Be willing to wait, to be alert, and be ready. What’s pleasing to him is that you’re available when he wants you.”

I recently had a talk with Lewis, who was grappling with these same questions, eager to move forward in some of our big ideas for the ministry, anxious to see progress and results. It’s exactly how I used to feel, and how I still feel sometimes. But this time I was able to point him toward the success that really matters. What pleases the Lord more than all that stuff is living by his word, providing for our families and leading them to him, living a godly life. Quiet things.

If we want to see real success that changes our lives from the bottom up, then we need to be willing to give up changing the world and learn to love doing what pleases the Lord.