An interesting dichotomy has been argued in Christian mission. Should the Christian’s mission in the world focus on verbal witness, or should acts of care and compassion be our priority? Word or deed?

I answer the question with a resounding, “Yes…both!” Jesus illustrated a seamless concern for peoples’ hearts, bodies and relationships and the early church understood Jesus’ intentions to embrace all of human need and humanity in its entirety. No longer could any credible argument be made for separating either Jew from Greek, or separating word from deed. We are a seamless whole and God cares for all of humanity. That is God’s mission. We participate in many ways.

Why then does the debate continue? I suspect two reasons. First, there are examples of mission and evangelism that have been patronizing and condescending. The mission thrust of the church has not always been carried out with sensitivity, and has sometimes been linked to cultural pride and power. This is true, although it is not immediately apparent why this is often cited as an argument against verbal witness but not against compassionate deeds. Well-meaning deeds can be as patronizing as ill-spoken words. Still the fact of the Crusades looms as a horrible example of “Christian” motives gone awry. We continue to live in their wake.

I think there is a second reason too. I suspect that Christians not only question the method of Christian mission, but sometimes even wonder whether it is necessary at all. The message, not simply the method, is thought to be condescending, a carryover from an imperialistic and colonizing past.

I often hear a supposed quote of Saint Francis. “Preach the Gospel, and when necessary, use words.” Apart from the question of whether Saint Francis actually said it, I really do like that statement. And too, I like Saint Francis’ example. On the heels of the Crusades and the debris of human conflict Saint Francis articulated and practiced simplicity, joy and love as the motives that would form his life and the character that would define his witness, even to the Muslim world. His compassion led him into the very presence of the Sultan of Egypt in the year 1219 where he attempted to share the gospel, using words. His mission held together deed and word.

The pages of Connections share stories of many who are involved in God’s mission, motivated by the variety of human need and engaged in a range of places and peoples. Their vocation is God’s mission, employing both word and deed. I invite others to join this company of “word and deed Christians,” to be included in another issue at a later date. 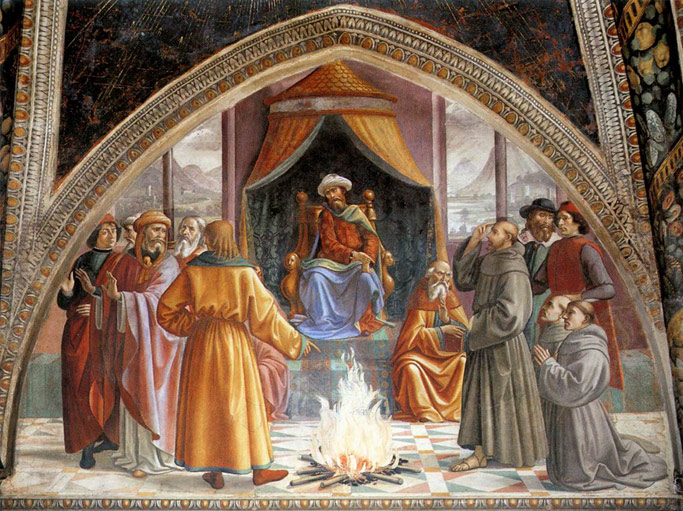 The Trial by Fire, St. Francis before the Sultan of Egypt. Domenico Ghirlandaio, 1485