A Call to Shkodër

Rafael Tartari reflects on how the call to be multiplying disciples has led to a new ministry venture for him and his family in Shkodër, Albania.

A vision of multiplication requires a heart totally focused on the kingdom and its expansion, a heart rich in compassion for the lost. The cycle of the multiplying life is this: to be born, to grow, to mature and to multiply. This natural process involves constant transformation. It begins when we realize our need—not for religion, but for Jesus. It comes to completion with our commitment to the multiplication of new disciples.

Multiplying by making disciples is our calling. We need to believe in the potential of “one-to-one,” the impartation of life from “one to another.” This is nothing new, but it is in fact the driving force for the growth and evangelization of nations. We know that this thing called discipleship is the secret of the multiplying church. 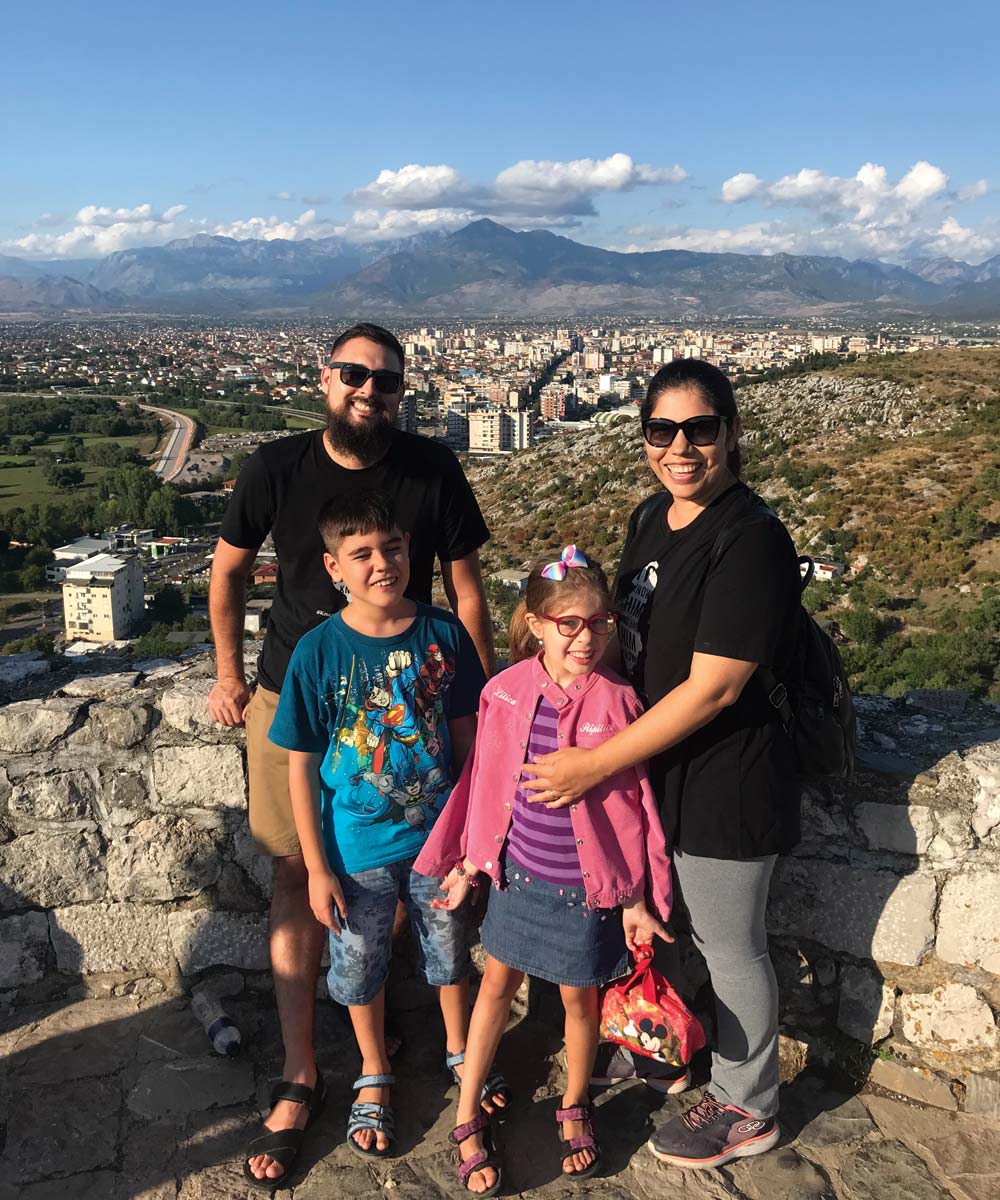 Rafael and Solange Tartari with Paulo and Sofia overlooking Shkodër, Albania, from Rozafa Castle. Located on the Adriatic Sea, the city of Shkodër has been in continuous habitation since the 4th century B.C. and is recognized as the capital of northern Albania. Known for being religiously tolerant, it boasts both mosques and Islamic schools and Roman Catholic cathedrals. Photo courtesy of Rafael Tartari.

Earlier this year, I met an Albanian friend, Gusti, at a conference. Gusti shared with me his vision of planting a church in northern Albania’s largest city of Shkodër. He told me about the strategies they use to preach the gospel and make disciples in that city. At that same conference, I had the opportunity to share with the gathered group that my family and I were praying for God’s guidance to serve in a new city. After the conference ended, Gusti invited us to serve with him in Shkodër. He emphasized that he and his family had been praying that the Lord would send a family with hearts ready to love people and engage them in a discipleship process.

After many visits between our families in which we prayed together and talked deeply about our common vision and Albania’s needs and challenges, we felt God move our hearts to this new challenge. We agreed to serve together in unity for the expansion of the kingdom.

Gusti and his family have served here in Shkodër for eight years. They work primarily with students, as Shkodër is the only city in northern Albania with a university. Many of the students come from other northern cities where there is no witness for Christ. Thus, a great many of them have their first contact with the gospel when they come here to study.

Soon after this decision, I sensed a confirmation from the Lord through a group with which I am affiliated, the Northern Albania Pastors Alliance. The local leaders of this group chose me to serve as the new coordinator. Thus, I am excited to envision how this role can provide a great opportunity to open new contacts and paths for those students who are being won and transformed by Jesus. It energizes me to think that when they return to their cities they can serve there or perhaps even plant new churches!

We moved from Lezhë to Shkodër in June. We have the challenge of a new dialect of the language, but we are adapting well. We face a financial challenge since the cost of living is higher here than in Lezhë. Despite this challenge, we are filled with much hope for a new generation of Christians who will be God’s witnesses in this nation. 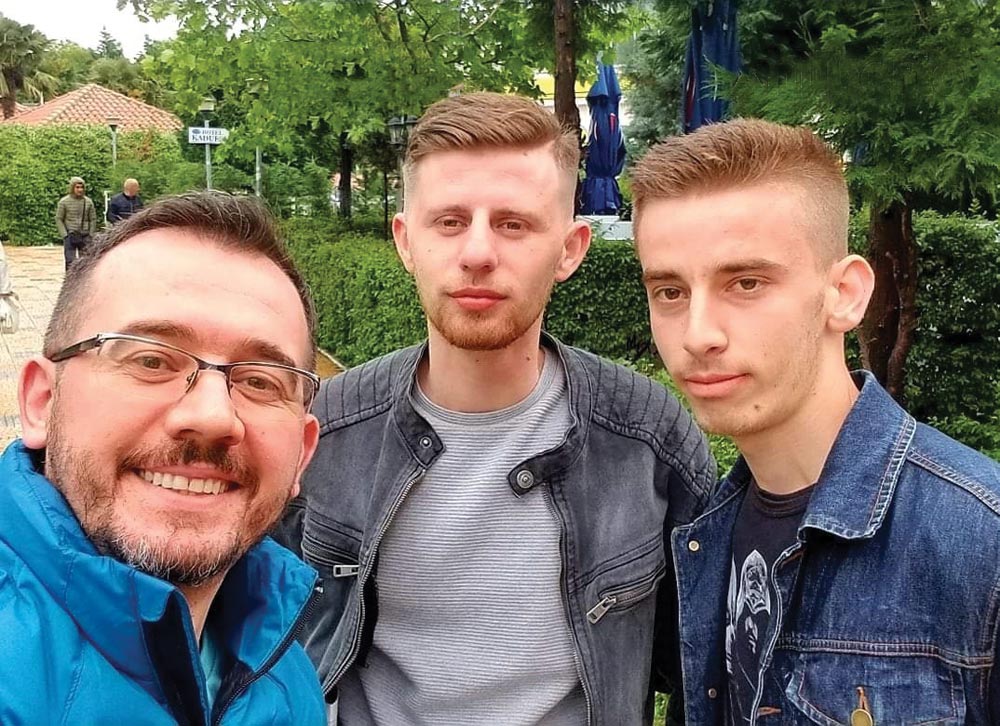 Gusti (left) is a new colleague of Rafael and Solange Tartari in Shkodër, where he has been serving with his family for eight years. He is pictured with Klisten (center), who gave his life to Christ as a student in 2018, and who in turn prayed for and led Xhilberto (right) to faith in Jesus. Photo courtesy of Rafael Tartari.

When we arrived, Gusti told us about a young student named Klisten who gave his life to Christ in October 2018. Gusti told me that it took Klisten a long time to understand how someone can have a personal relationship with God. He was a Catholic by training and thought he had Jesus because of his religion. But in time, Klisten understood that the new birth proposed by Jesus is different from being a religious person; it is restoration of broken relationship with God through Jesus, resulting in a changed life that will impact others!

Just five months after meeting Jesus, Klisten led a group of high school students during an evangelistic event. Xhilberto was part of the group. Though Kristen shared the gospel with many teenagers, Xhilberto was special. Klisten prayed every day for Xhilberto, that he would understand the gospel.

After the evangelism program was over, Klisten continued to share and spend time with Xhilberto. Soon, he eagerly shared the wonderful news, “We have a new brother! Xhilberto has just accepted Christ!” What a blessing! A new believer like Klisten multiplying his faith!

The city is full of students like Klisten and Xhilberto who are ready to hear the gospel. We know that for many of them it is not an easy decision. When they return to their cities, they are likely to face problems with their Muslim, or even Catholic families, rooted in their traditions and religiosity. In some cases, they may even be expelled from their families or suffer family persecution because of their faith in Christ.

Our task is to lead these disciples into a daily life of prayer and knowledge of the word of God. We must live in total dependence on the Holy Spirit of God, because he alone will lead the sinner to repentance. We have responsibilities—to new converts, to those who have heard nothing of Jesus, and to those who have heard but not responded to the gospel. According to II Timothy 4:2, we need to preach in season and out of season. We praise God that some of those into whose lives we have sown will remain and bear fruit!

Klisten is now engaged to Ola. This young woman came to study in Shkodër six years ago from her hometown in the Kukës region, which, according to local statistics, is the most gospel resistant region in Albania, being totally Muslim. Ola heard the gospel here in Shkodër through Gusti’s ministry. As a married couple, she and Klisten will be part of a new generation of lives changed by Christ, devoted to the glory of God, bearing witness here in Albania!

We must make disciples for the kingdom of God. We are not setting goals for our own convenience, according to our own agenda. This is not something we choose to do. It is something for which God has chosen us! We are living in a time when everyone has their own way of thinking, as if there was no standard, no direction. But Jesus is Lord of everything and everyone, and he made disciples. Every day we have to decide to obey Jesus’ call again. Our life on this earth is fleeting. May we come to maturity, bearing the fruit of multiplying disciples—lives saved and transformed by Jesus. Multiplication in mathematics is a natural operation, but the multiplication that Jesus does is a miracle!

Rafael Tartari serves with his wife Solange and two children in church planting and discipleship ministires in Shkodër, Albania.