Mark Schoenhals is keenly aware of the challenges and rewards of carrying big hopes for multiplication while doing the small work of discipling the few in Thailand.

Throughout the Bible, we see God’s particular enjoyment of multiplication. In Genesis, God tells Adam and Eve, and then Noah, to fill the earth. God chose Abram to become a family and a nation as numerous as the stars, to be a blessing to the world. Later, Jesus poured his life into a few disciples, envisioning that the good news would be carried through them to the ends of the earth. At the beginning of Acts, there were 12 apostles, and then 120 disciples praying on the morning of Pentecost. By evening there were 3,000 people baptized. Soon, the number had grown to 5,000, with more added daily. Timothy was instructed to take what he learned from Paul and teach it to reliable people who would also teach others – a key to multiplying disciples and leaders.

The Bible also tells the story of our human experience with failure as well as our tendency to adopt the more moderate goal of mere addition. Moses trained Joshua in spending time with God and leading the people. Joshua spent many years in Moses’ shadow and became a great leader, but he didn’t raise up a leader after him. Elisha followed Elijah, but who was there to succeed him? Samuel mentored leaders, primarily Saul and David. He experienced grief in watching Saul’s life unravel and although David’s line continued, subsequent generations stumbled badly. On a human level, personal faithfulness seems to present us with all of the challenge we can handle. When we see addition, we sense God’s blessing. But multiplication? Impossible! 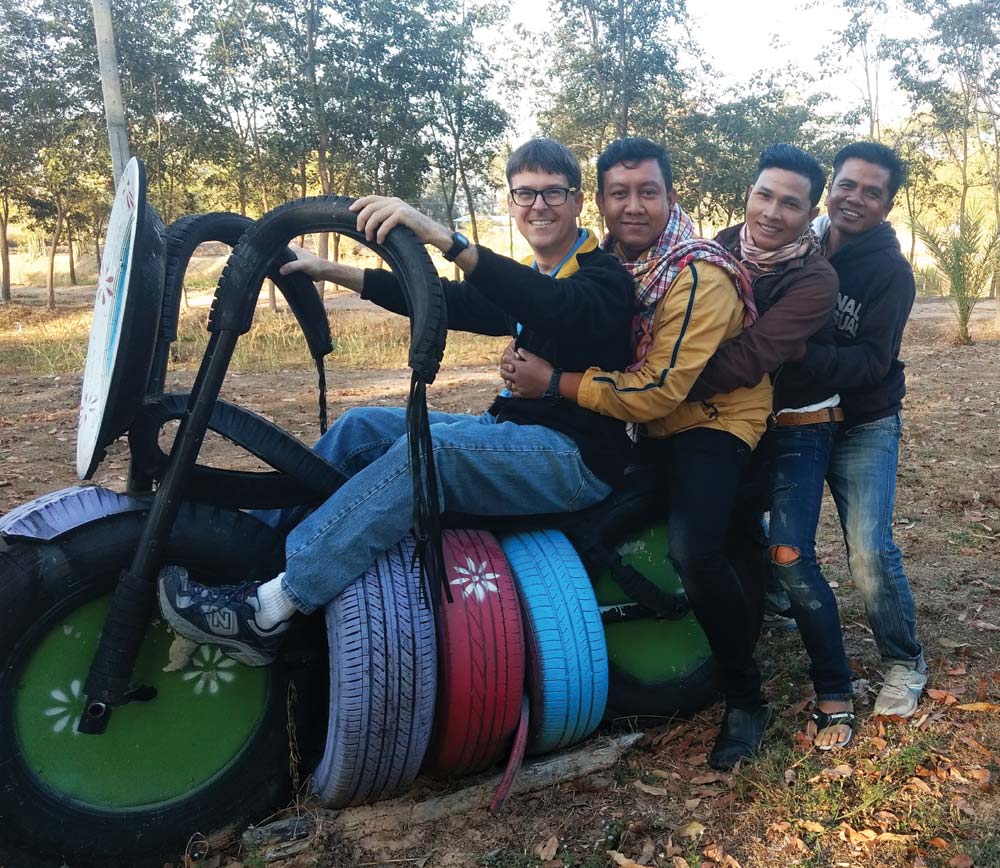 In Isaan culture,”If it isn’t fun, it isn’t worth doing.” Thus, Mark’s discipleship journey with these friends is filled with simple fun and friendly banter. From left: Mark, Lek, Wit and Yut. Photo by Mark Schoenhals

Life Enrichment Church (LEC), a network of house churches in a forgotten rural corner of Thailand, was planted with the vision of multiplication in the late 1990s. How might God reach this impoverished, minimally educated corner of the country?

Those first pioneer missionaries knew that it would not happen by building buildings and hoping people would come. Instead, they mounted their motorcycles, braving heat and dust – or monsoons and mud – to spread seed broadly, looking for the few who would respond.

They poured into those few, teaching them to share what they were learning with their families and neighbors. As soon as there were a few believers, they taught them to worship together without outside help. Family and relational connections carried the good news to other villages and the process was repeated, this time, by local people who had been raised up as disciples. In those early years, the multiplication happened quickly. Yes, it was messy, but disciples made disciples, who made more disciples. Within a few years the house church network had grown; it became self-sustaining and independent of the mission agency.

As LEC continued to mature, the vision of multiplication was not forgotten, but the expectations were perhaps not as high as at first. While the church continued to sow seeds and share the good news broadly, the number of committed disciples and house churches mostly stayed the same. People were added and others faded away. Energy and enthusiasm dwindled. Perhaps they were like the disciples who gazed upon the crowd of over 5,000 and were so ready to discount the five loaves and two fish in their hands, despite having seen Jesus’ power.

But, Jesus doesn’t look at how little is in our basket. Instead, he invites us to imagine—to watch and see what he can do when we ask him. In the past few years, as we have intensified our prayer for multiplication, God has been teaching us. Naturally, we want to see big things now, but God has been teaching us to expect big things by starting small and watching him do the multiplying. We do not have the capacity to mentor large numbers of people, but as each person disciples a few people who mentor others, multiplication begins to happen. One of the most rewarding parts of our work has been hearing the people we disciple tell about how they’ve taken the things they’ve learned from us and are training others. 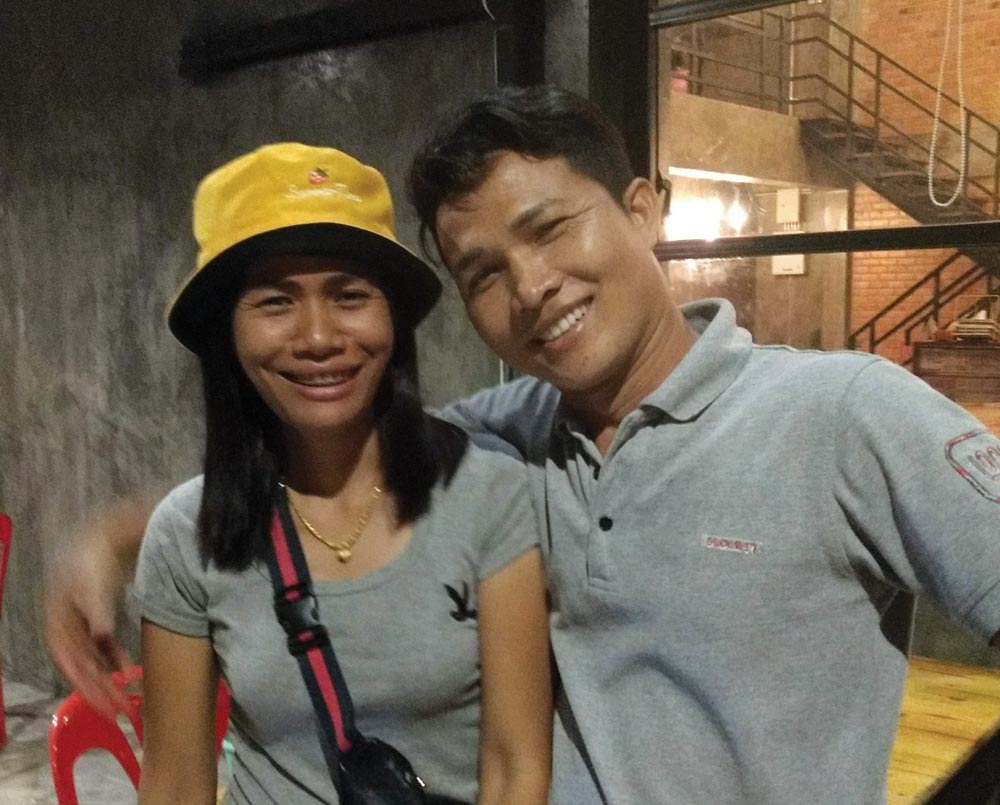 Wit and his wife Ae on a night out with Mark and Sarah. Photo by Mark Schoenahals

One of the men that I have been mentoring is Wit. We meet intentionally now every two weeks, studying God’s word and learning to live in obedience to it, as well as studying lessons in discipleship and leadership. Wit is continuing to mentor new disciples, but now that he has been chosen as a leader in the church network, he is also now mentoring other house church leaders. How I mentor Wit is not just about his growth, but about the persons he is mentoring, as well as the house church members that those leaders are mentoring. Thus, my mentoring is multiplied into his network of at least 8 people. As they continue to grow, I hope that some of them will continue the chain of multiplication within their networks of relationships.

The goal that I must embrace is not just to mobilize a single new generation of leaders, but to mentor leaders who will train and mentor more leaders. If each of those leaders is mentoring disciples who make and mentor more disciples, the potential for exponential growth can be realized! When our focus is just on the next person, we are merely adding a few people, at best. It is when we envision not just the second generation, but the third and fourth and more generations – that we see God’s multiplication at work, and we marvel at the miracle of what God can accomplish.

The light of Christ is shining in this corner of Thailand. Twenty house churches are beacons in the darkness. Yet, there are over 700,000 mostly rural people, 99.8% of whom have never heard of Jesus, living within a thirty minute drive of at least one of these scattered house churches. How will they hear? If we add a few people here and there, we will never reach them. But, when disciples make disciples, who then make more disciples to the third, fourth, and more generations – we’ll stand back in amazement at how God’s arithmetic works. Is it really possible that this corner of “the ends of the earth” will no longer be unreached, but will have a house church in every village? Absolutely! How? By God’s Spirit and by the multiplication of disciples following Jesus and obeying his command to make more disciples.

These principles of multiplication are compelling and applicable not just in the Bible or on some foreign mission field. What might God be speaking to you and your church community about multiplication? When we listen to God’s heart and respond in obedience, God will accomplish more than we can ask or imagine! Can you audaciously believe that Jesus can take the 25, 50 or 100 members of your church family and multiply them to yield a harvest—30, 60 or 100 fold? Can you look at the five loaves and two fish in your “basket,” and ask the God of the universe how he might want to multiply them?

Mark Schoenhals serves with his wife Sarah and daughters Heidi and Hannah in Det Udom, Thailand.