A Church That Stays Standing

As Steve and Laura Campbell bring closure to their assignment, Steve reflects on the vision for the future Montenegrin church that has guided them in their ministry. 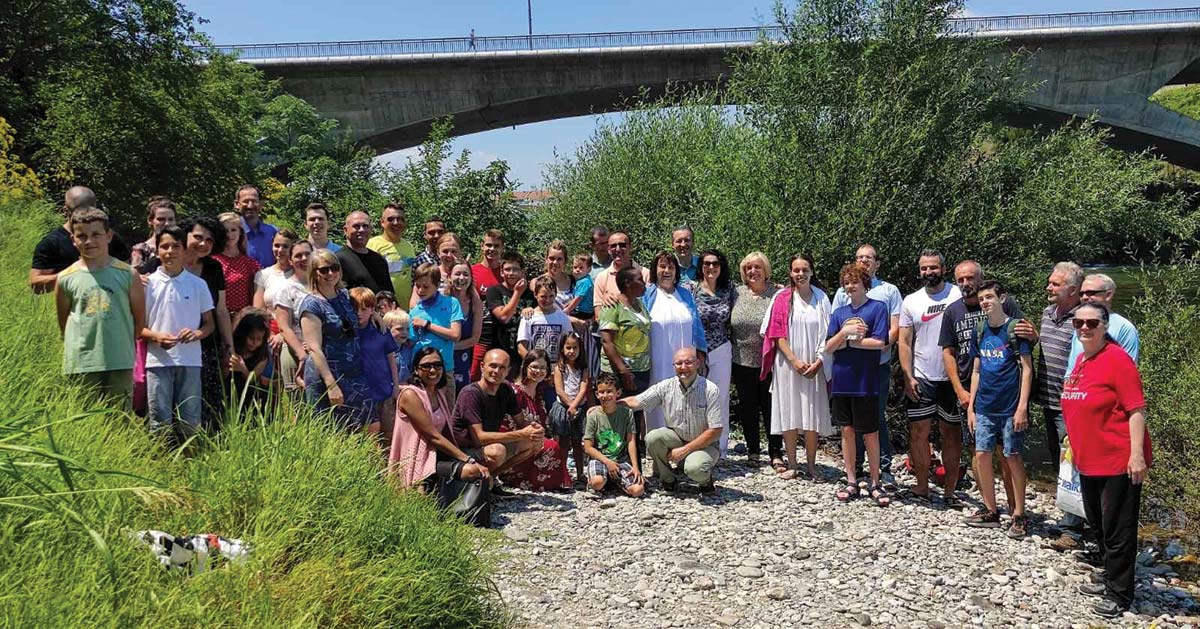 The Podgorica congregation with whom Steve and Laura Campbell serve celebrates baptisms at a local river. Photo courtesy of Steve Campbell.

Our call in 2009 was very clear: God wanted us to encourage and equip the church, and we were to do this in Montenegro, a country in Southeastern Europe the size of Connecticut.

With only 350 evangelical believers, this a place where the cultural landscape is dominated by the Serbian Orthodox Church and where evangelicals are seen as a heretical sect. Of those 350 evangelical believers, only 50 would identify themselves as Montenegrin. Others are more recent arrivals from Serbia, former Yugoslavia, and the Americas. Into this challenging context, we came with hearts ready to announce the kingdom of God and point people to Jesus.

Our hope has been to plant Christ as the seed so that a Montenegrin church could grow. Thankfully, the success of our work is measured in Kingdom terms; we have worked for the Lord, not for people. This has been both rewarding and intensely draining. We have labored, knowing that it is the Spirit working in us who alone can bring about the birth. We like the picture in Revelation 4 of the elders casting their crowns before the throne of the Lamb. We lay down all that we have done and failed to do that our attention would be riveted on God and God’s glory. 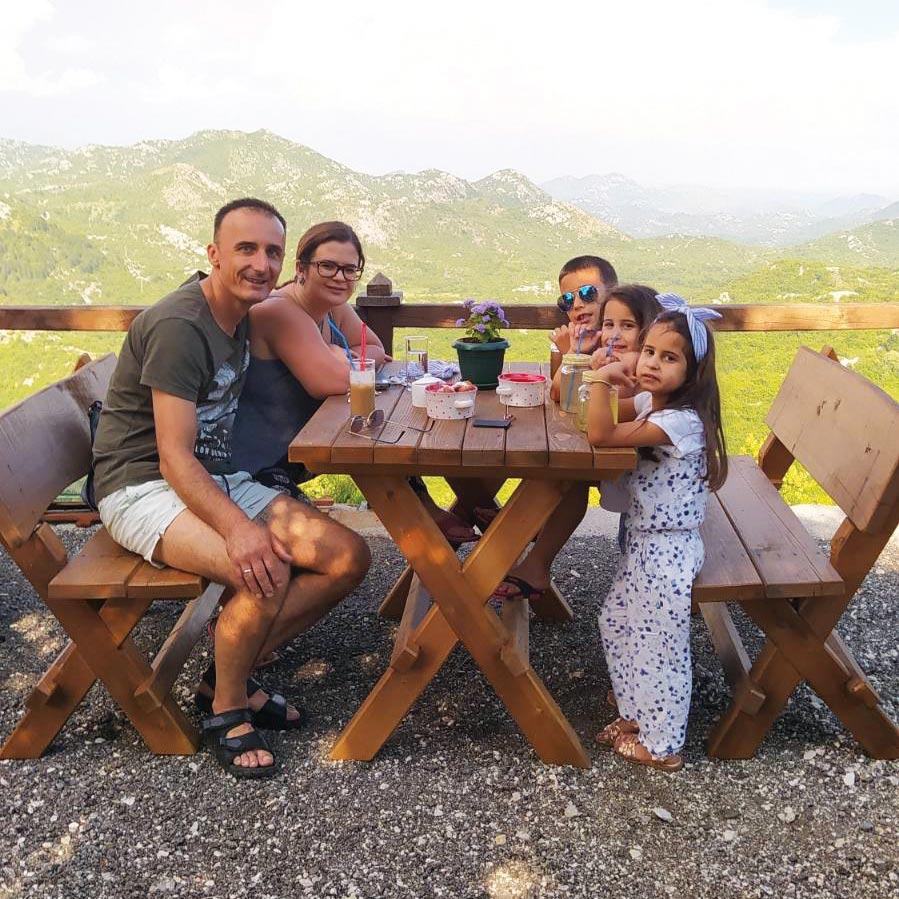 Steve describes his family’s relationship with church leader Lazar Simonovic and his family as life on life. “We have done life together and have grown closer to God and one another.” Photo courtesy of Steve Campbell

As we now prepare to leave, we expect to see the church standing on its own. This is because we have viewed our presence as scaffolding that can be removed to reveal not a splendid cathedral but something that in human terms might seem flimsy and flawed: a structure of Spirit-breathed relationships that will carry forward the witness of the gospel long after we leave. Early on, we asked local believers in Podgorica about their vision for the church—what they saw and hoped for the church of Montenegro. Based on what we heard, we have worked as God instructed us to encourage and equip them to move toward that vision.

One hope they carried was to form small groups, like a cell church. And as of last fall, small groups were launched for the whole church. We’ve used the Discovery Bible Study (DBS) structure, starting with a few people and then continuing to present the idea to the larger church body. Discipleship training is built into DBS, so each member can learn how to guide Bible studies with contacts that they have. A focus on small groups can help with the vision these believers carry for forming more churches in Montenegro.

There was also a vision to move from a single pastor to an eldership team, so I agreed to help move in that direction and to bring some balance and administration to that group. One significant success in our context is to now have a Montenegrin serving as an elder.

There is another young Montenegrin with whom I have been working. He is learning to preach and is now planning to go to Bible school. He is committed to coming back to Podgorica when he completes his studies in order to serve the church for at least three years. He could be a future elder, enabling the church to take another step toward being locally led.

The local believers also envisioned a comprehensive discipleship program that rests on deep personal relationships. The Bible studies have been a large part of that deepening, but we added a baptism class and prayer ministry (using Freedom in Christ material) to our already existing membership class and spiritual gift discernment materials. We have discipled/mentored many folks in the church. One time we were at a prayer meeting where perhaps a dozen men were present. Looking around the room, Laura said, “You have at one time or another discipled every man in this room!” 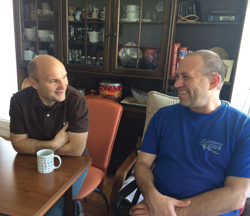 When Montenegro became an open country, it started to be more attractive for missionaries. Some of them came and started to pursue their own agendas, sometimes not even wanting to connect with existing churches in the country. This was not the case with Steve and Laura Campbell.

Another vision was that the church become a sending agency for missionaries. One man that I mentored has moved with his wife to do mission work in the coastal town of Kotor. One final thing that I have worked on has been to help people share their faith journey and to invite others into the story of God. Being able to develop skills in listening, teaching, administration and relationship building has been a privilege, and has challenged me toward the holy life that God desires for me.

I see hopeful signs for the coming years of evangelical witness in Montenegro. When we first came to Montenegro in 2008-2009 on a short-term tranSend assignment, the hearts of so many people were hard. When we came back in 2012, we sensed ground being broken. Our many chats with taxi drivers, waiters at coffee shops and neighbors reveal an increasing hunger for God. As traditional sources of hope come up empty, they are more ready than ever before to dig deeper for answers.

I am encouraged to see the eyes of Montenegrins opening to the ways that God wants to use them to reach their nation. I still recall what felt so significant to me following a prayer walk through our community. I had asked the participants if God had shown them anything new as they prayed. One Montenegrin spoke up. “This is my town. I am born here and so often I have viewed my fellow citizens as lost. I have had no hope for them. But God showed me how he views these people. This broke my heart: to pray for my fellow citizens as God sees them.”

As we leave Montenegro, our kingdom hopes remain the same. We want to be obedient to God’s call for the next step. Maybe it means helping a local body in the States to start over with biblical discipleship. Or maybe it means forming new communities of disciples who will be ambassadors of reconciliation. Of course, as central as any of these hopes are is the hope that our daughters come to accept Jesus as their personal Lord and Savior and serve him all of their lives. As we continue to grow in our identity in Christ, there is freedom in knowing that we are not measured by the world’s standards.

We are not responsible for growing the kingdom, but only for pointing people to God. This is our offering—the crown we cast at the feet of Jesus!

Steve and Laura Campbell and their daughters Ruth and Esther have served in Podgorica, Montenegro, since 2012 and are completing their assignment this summer.