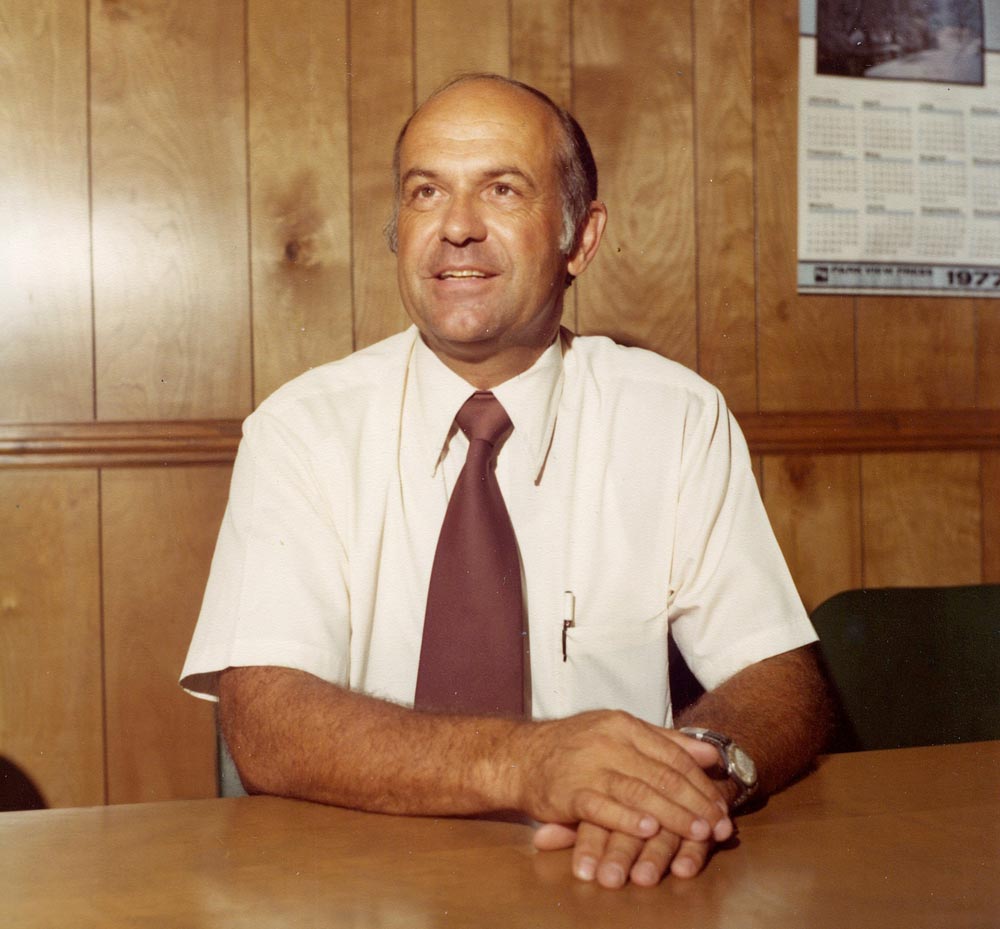 Lloyd was born on January 16, 1924 in Lancaster, PA, to Martin Lloyd and Sara Stoner (Oberholtzer) Weaver. On June 18, 1947, he married the former Sarah Yoder and became an Eastern Virginia dairy farmer. Like his parents, he had a heart for God and a strong dedication to service. He is recognized as a man of integrity by those with whom he served – humble, strong, encouraging, committed and full of good humor.

In addition to his leadership of VMMissions, Lloyd carried significant roles in Virginia Mennonite Conference. He served as pastor of Huntington Mennonite Church when it was in downtown Newport News and after it moved to its new location in the early 1970s. He was the overseer of the district from 1976 to 1995. Those were turbulent times of great social change, but as his daughter Lavonne reflects, “He seemed to be ready to make way for new people.” As a young person at that time, Loren Horst, VMMissions president from 2002-2013, appreciated the Spirit-led and visionary leadership provided by Lloyd and other leaders of that era. “We younger people could feel some freedom to explore ministry and God’s leading in a church that was led by others. They were in charge, and they always seemed to keep things under control, more or less, to make sure things turned out okay.”

Lloyd was enthusiastic about missions and especially enjoyed visiting the missionaries on location. He and staff member Roy Kiser scouted out possible work in Guyana and Trinidad. Their vision led to the deployment of the Kratzes and the Keelers. Through them, Hansen’s disease in Trinidad was defeated, and the Way to Life radio programming and Bible correspondence courses reached thousands. Both of these initiatives were instrumental in spawning the eventual emergence of many new churches. Paul Kratz reflects, “We always felt that Lloyd was behind us in our efforts to bring people to a saving knowledge of Jesus Christ and to establish settings where new believers could come together to worship God and encourage one another—often called, ‘church planting.’”

Lloyd and Roy visited workers on the field, talking to them about how things were going, following up on mission developments. Willard Eberly, serving at the time in Bari, Italy, recalls, “He always wanted to learn as much as possible about the local situation and meet the people, always asking insightful and thought provoking questions. One of his repetitive words of advice to us was to remember that we should do our best to work ourselves out of a job. His vision was to see the local people mature and take leadership as soon as feasible.”

Richard Keeler shares, “Leaving the presidency didn’t change his commitment to VMMissions or to those working in mission. Probably 25 years after he left the presidency, he visited us in Trinidad; he wanted to learn more about the church there and to encourage us.” 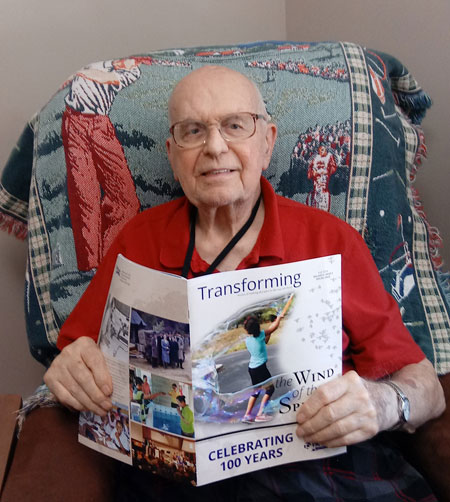 As was typical of many churchwide leadership positions at the time , Lloyd served VMMissions without remuneration, being “good for nothing,” he would say. At other times, he was known to humorously quip, “The cows paid the way for me to serve the Lord!”

For Willard and Eva Eberly, the words in prayer that Lloyd spoke over them as they were bringing closure to their missionary tenure still echo in their ears. Lloyd had prayed, “Lord, you are saying ‘Well done thou good and faithful servants.’” Now, say the Eberlys, “It is our turn to declare the same words of benediction over our beloved Bro Lloyd who has gone to receive his reward and dwell with his Savior and Lord. And more significantly than hearing these words from us, we trust that Lloyd is hearing them from the Lord he served throughout his life.”

A memorial service will be held at a later date.

A private family burial at Warwick River Mennonite Church Cemetery will also be held at a later date.

In lieu of flowers, the family requests all memorial contributions be made to the Williamsburg Christian Retreat Center, 9275 Barnes Road, Toano, VA 23168; or to the Virginia Mennonite Missions, 601 Parkwood Dr., Harrisonburg, VA 22802.

Those wishing may share a memory or an online condolence by visiting www.mcmullenfh.com.

A note from Paul Kratz, former mission worker in Guyana and Trinidad:

We deeply appreciated Lloyd’s leadership as president of Virginia Mennonite Board of Missions during our time as missionaries to Guyana and later to Trinidad. The policy of the Mission Board when we first went to Guyana was that missionaries should purchase locally whatever items they needed to set up housekeeping in their country of ministry. When we arrived in Guyana and discovered that refrigerators and cook stoves were very small and considerably more expensive than our budget allowed, Lloyd took it upon himself to find a good used refrigerator and cook stove here in the States, and had them shipped to us in Guyana. That was far more than we expected anyone to do, let alone the president of the Mission Board!

Lloyd was a consistent encourager and we were blessed the couple times he visited us in both countries. Our daughter, Celah, was four years old when he visited us in Guyana, and she took to him as though he was her own grandfather. She wanted to hold his hand wherever we went. In response to our admonishing her not to bother him like that, he said, “Leave her alone, we are just fine!” He may have enjoyed it as much as she did!

Lloyd had a good sense of humor. Ever since the time Paul came down with mononucleosis is Guyana, and Evelyn carried on church services by reading printed sermons, Lloyd loved to tease Evelyn by saying that she was one of the first women in the Mennonite Church to preach!

We always felt that Lloyd was behind us in our efforts to bring people to a saving knowledge of Jesus Christ and to establish settings where new believers could come together to worship God and encourage one another—often called, “church planting.”

Lloyd had a significant role in arranging for the Virginia Mennonite Board of Missions cooperating with the Mennonite Board of Missions to provide The Way to Life Broadcast and home Bible study follow-up, which enhanced our witness in significant ways. The broadcast was well-known and appreciated, and opened many doors for further personal ministry. In both countries, when we met new people, and they inquired what church or organization we were aligned with, we just needed to respond, “Are you familiar with The Way to Life?” Their response was almost consistently a smile, and a “Yes!” That opened the way for further discussion and interaction.

A note from Willard Eberly, former mission worker in Italy:

Lloyd was president of Virginia Mennonite Board of Missions in 1969 when we were appointed to our first term of missionary service to Italy. He was so affirmative of us as new candidates to the field. In addition, we remember his enthusiastic and passionate leadership of the annual conference-wide mission rallies which promoted missions. He was always Gospel centered in his focus calling people to salvation and discipleship.

We remember him for his warm, encouraging, and affirming way of relating. He was always deeply interested in our personal lives and our ministry making us feel so special and cared for. While on furlough we were customarily invited to share both during the Sunday School hour as well as during the worship service, while he was pastor at Huntington Mennonite Church. We felt so appreciated, loved, and cared for, not only by Lloyd and Sarah, but by the entire congregation who reflected the warm hospitality of their leader. On several occasions the Weavers hosted us in their home which was so delightful.

During the period from 1969 until 1979 he traveled to the field on various occasions with the field secretaries. We particularly remember his visits with Roy Kiser and Addona Nissley. He always wanted to learn as much as possible about the local situation and meet the people, always asking insightful and thought provoking questions. One of his repetitive words of advice to us was to remember that we should do our best to work ourselves out of a job. His vision was to see the local people mature and take leadership as soon as feasible.

In their retirement years Lloyd and Sarah were committed members of our Missionary Support Team. We felt so privileged to have them as our prayer partners and have heart-warming memories of our MST meetings while on home assignment. Sometimes he would respond personally to our prayer letters, thus continuing to encourage and affirm us. Also while on our MST he and Sarah traveled to Sicily to attend the 50th anniversary celebration of the Italian Mennonite Church, joyfully participating in all aspects of the event. His presence was a special blessing to us! He surprised us all that he rented a car so that he and Sarah could explore the Island.

Also while serving on our MST, by then in his 80s, he was so interested in learning to know and experience the work in Albania that he asked to accompany me (Willard) on one of my administrative trips there as the Mediterranean director. I was living in Bari, Italy at that time, so arranged to meet him in the Rome airport at the departure gate for the connecting flight to Tirana, Albania. Because of post-polio syndrome, I always traveled with wheelchair assistance. When I met Lloyd at the gate, who had arrived earlier and was waiting for me, he displayed shock at my condition.

Thinking of the challenges that lay ahead, he exclaimed with astonishment and bewilderment but also with a twinkle in his eye and his characteristic chuckle, “Willard, I had no idea you would be in a wheelchair! How are we going to help each other out if we both fall in the ditch?!” Needless to say, our trip went very well! I was thrilled to have Lloyd with me and to observe his enthusiastic participation and interaction with the missionaries and the Albanian people.

At the VMMissions-sponsored celebration for us in bringing closure to our missionary tenure, Bro. Lloyd joined others who gathered around us for prayer. His words still echo in our ears and touched us deeply, “Lord, you are saying to Willard and Eva–well done thou good and faithful servants.” Now it is our turn to declare the same words of benediction over our beloved Bro Lloyd who has gone to receive his reward and dwell with his Savior and Lord.

One final memory of Lloyd and Sarah took place when we stopped by their home for a late afternoon visit in order to commemorate their 70th wedding anniversary. After a lovely visit, Bro. Lloyd suddenly sat up straight, leaned forward and declared in a resolute voice, “Now, Sarah and I are going to host you for a dinner at a local restaurant.” No words could dissuade him from the idea so off we went to Taste of Thai for a wonderful meal and more fellowship together, a touching illustration of his generosity and kindness that was always at the core of who he was.